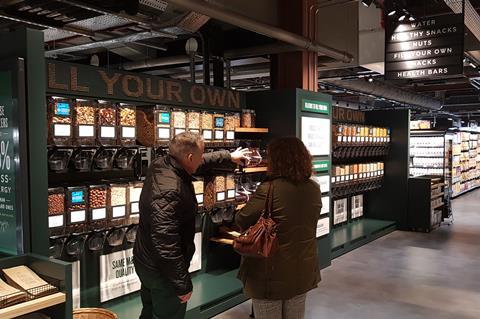 M&S has launched a refill aisle where customers can fill up their own containers with a range of produce including rice, pasta, cereals and nuts.

The packaging-free aisle is one of the features at the latest M&S Food Hall to be made over in the retailer’s store renewal programme.

The Hedge End Food Hall has grown to become M&S’s biggest, expanding from 15,000 sq ft to 25,000 sq ft by taking space from the store’s clothing department. It makes it 8,000 sq ft bigger than even the Hempstead Valley Food Hall in Kent, the first to get the renewal treatment last summer.

The Hedge End Food Hall, which opened in December, now occupies the entire store front as customers enter from the car park. Previously they would have arrived first in clothing.

Other products available from the refill stations include lentils, couscous, raisins, sultanas and chocolates. The loose products are priced 10% lower than the packaged alternative, according to M&S, and all are own label.

“We considered concessioning it but we always start by asking, ‘If we can’t do it, why?’” M&S Food MD Stuart Machin told The Grocer.

Customers without their own container can buy a reusable plastic one for £7.50. Alternatively, they can use a free paper bag.

Two weighing stations are provided where containers must be weighed twice, first empty and then filled. A member of staff stationed in the aisle to guide shoppers is one of several new roles at the store.

Asda and Waitrose are also exploring packaging-free initiatives. The latter launched its Waitrose Unpacked format at a test store in Oxford last summer, before rolling it out to three more branches.

Asda last week announced it had joined forces with food giants Unilever and Kellogg’s to launch a sustainability store in Leeds. Branded cereals and PG Tips, along with Asda own-label products such as coffee, will be available from dispensers in a trial launching in May. The store will also continue to offer packaged products.

Together with loose fruit & veg, which M&S launched as a trial involving 40 lines in Tolworth a year ago, Hedge End has 50% more loose produce than a typical Food Hall, according to a spokeswoman.

“Some say we should stop the plastic [altogether] and force everyone to buy [packaging free]. I say let’s offer both and let the customer decide,” said Machin.

“How do you scoop out blueberries and protect them from going mushy?” he added.

Other new features at the Hedge End Food Hall include a Pasta Evangelist concession and a ‘Prep Kitchen’ where staff assemble tray bakes for customers to cook at home.

Like the Clapham branch, the store has a pizza oven cooking M&S pizzas, but Hedge End introduces optional extra toppings. Customers can eat pizza or drink a coffee from the coffee counter at a table with free wifi and wireless phone charging.

The branch is one of only around a dozen to feature M&S’s full range, now at some 6,500 products, up from 6,000 at the time of Hempstead Valley’s relaunch. Additions since then include recipe kits for two, costing £8 or £10, packaged in cardboard trays and string bags rather than boxes, so customers can see what’s inside.

“I’m trying to get this rolled out everywhere,” said Machin. “Everyone in America does it. The difference is, they put it in a big box. Here you can see it all.”