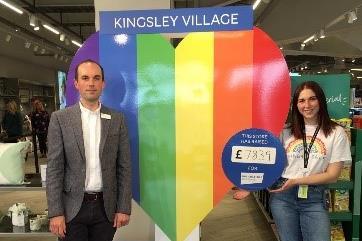 Marks & Spencer has raised £8m for NHS Charities Together through fundraising initiatives since April.

Its Rainbow Sale saw it give 10% of the purchase price (excluding VAT) for all items across its clothing and home departments to the cause, as well as all profits (equivalent to 10p from its 20p price tag) from its NHS-themed bags for life.

These were stocked at all 560 food halls.

The idea of the heart and rainbow theme bag for life came from suggestions from shop floor staff.

The manager of its Carlisle branch, Craig Corrin, also suggested staff donate their 15% bonus for working during the pandemic to the cause, which was then implemented into the M&S pay roll system. The retailer would not confirm how much was raised this way.

Customers played their part via collection points at every M&S checkout area, as well as 24,000 who donated through the Sparks app. The seven million members of its Sparks loyalty programme can request M&S to donate to NHS Charities Together or 34 other charitable donations in their name each time they shop with M&S in-store, online or through the M&S app.

Customers have been able to choose a charity through Sparks since 2015, and there are currently 35 available, including Dementia UK, British Heart Foundation, Mind and Scope. If a shopper does not select a charity, any donations they make will be shared equally between the organisations.

The upmarket retailer also introduced T-shirts for men, women and children (rsps: £8-£9.50) with a rainbow motif and ‘All in this together’ slogan, with profits going towards the fundraising efforts. These were promoted by its ambassadors, TV presenters Amanda Holden and Holly Willoughby.

M&S would not confirm how much of the £8m was raised by each avenue of its fundraising, but said the majority came from its Rainbow sale.

“I can’t thank M&S customers enough – £8m is beyond what we could have ever dreamed of, the money you have raised is already making a huge difference for the NHS staff and volunteers who have been there for all of us during the Covid crisis,” said Ellie Orton, CEO of NHS Charities Together.