6
Who were the real winners of Hugh's Fish Fight?
Meat, Fish & Poultry Report 2015

Who were the real winners of Hugh's Fish Fight?

It’s been more than six months since the European Union implemented the first phase of its fisheries discard ban, which aims to halt the practice where crews are forced to throw unwanted catches overboard.

This practice came to the public’s attention with TV chef Hugh Fearnley-Whittingstall’s Fish Fight campaign in 2010 – and would eventually lead to widespread reforms to the European Union’s Common Fisheries Policy (CFP) – including the ban on discards for pelagic species, and a second phase of the CFP’s ‘Landing Obligation’ for demersal species due to be rolled out in January 2016.

While the campaign has been labelled a success by Fearnley-Whittingstall and his supporters, it has also been met with criticism by some parts of the fishing industry. Concern has also been expressed over concessions made during its passage through the European legislative process. So what did the Fish Fight set out to achieve? Did it really succeed? And has it left a legacy? 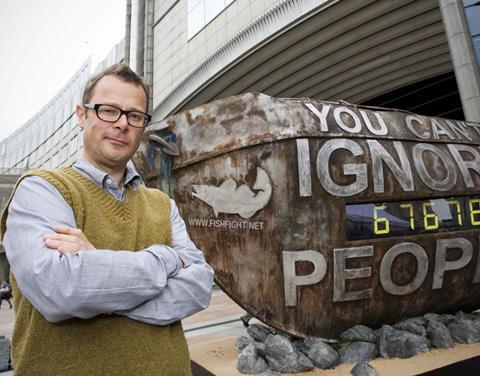 Hugh Fearnley-Whittingstall: “Discards were the dirty secret of the fishing industry”

The dumping of undersized or “trash” fish dates back decades, says The National Federation of Fishermen’s Organisations’ (NFFO) CEO Barrie Deas, but an official discard culture became more formalised in 1983 with the arrival of a total allowable catch (TAC) and strict fishing quotas under the EU’s Common Fisheries Policy (CFP).

Initially introduced to conserve fish stocks, Hugh Fearnley-Whittingstall says that by 2010, it had become synonymous with unnecessary waste, with 50% of edible fish in the North Sea thrown back into the water due to “crazy EU laws”. Fearnley-Whittingstall launched the Fish Fight campaign in October 2010, and this in turn spawned a Channel 4 TV series, and attracted 875,000 signatures to a petition calling for CFP reform.

It was designed to raise public awareness of “a raft of issues connected with Britain’s fish-eating habits, and the environmental issues in our oceans that follow from it”, he says, but discards very quickly became the “big story”. “The public were just so shocked by the phenomenal amount of waste,” he adds. “This was the dirty secret of the fishing industry, and a practice forced on fisherman by bad policies – policies the fishermen themselves were thoroughly fed up with.”

They focused on the three most popular fish eaten in Britain; cod, salmon and tuna, “and cod gave us the discards story”, he adds. “It’s one of the most valuable fish in the North Sea demersal fishery and yet one of the most discarded.”

“When we saw first-hand how it was being thrown away, tonnes at a time, along with coley, hake, whiting and other prime fish, we knew we had a big story,” Fearnley-Whittingstall says. “And we soon realised we wanted to campaign for an end to the shameful and wasteful practice of discarding over-quota and under-size fish back, dead, into the sea.”

What followed was a global groundswell of opinion to end discards, with signatories to the Fish Fight petition hailing from 195 countries. This, combined with concerted pressure on retailers and processors, more than 225,000 emails sent to the EU, 220,000 tweets to politicians and the backing of the great and the good from British industry, media and business eventually led Fearnley-Whittingstall to take his case to European lawmakers.

After debating the proposals, MEPs voted to a ban on throwing fish back into the sea. It was enshrined in European law in June 2013, and the first phase of the EU’s Landing Obligation was introduced on 1 January 2015 – ensuring crews have to land all caught pelagic species such as herring, mackerel boarfish and sprat. Crews also have to land any by-catch of quota species such as cod and whiting, and any fish caught under a minimum landing size under the new regulations, while an implementation of a discard ban on demersal species such as hake and cod is expected to be rolled out in January 2016.

While stressing that the campaign has also been successful in its other efforts – such as making tuna fishing and salmon farming more sustainable – the discards ban “should succeed in massively reducing fish waste, in addition to incentivising fishermen to use more selective gear, and help to rebuild fish stocks across Europe’s major fisheries”, claims Fearnley-Whittingstall.

But despite all of the progress made, there has been criticism of the campaign, its objectives and a perceived dilution of the Landing Obligation’s requirements as it has passed through the legislative process.

Exemptions tabled in December by the European Parliament’s Fisheries Committee chairman Alain Cadec MEP included a 50kg catch threshold, with crews not obliged to report discards under this weight, while changes to administrative requirements meant fishing crews would no longer be obliged to separate undersized catches in different boxes.

Cadec said the amendments “allowed sufficient flexibility” to ensure the Landing Obligation could be implemented on a gradual basis, but this drew criticism of “muddied waters” from environmental lobbyists such as Client Earth, who warned that the new rules were being undermined before they had even been enacted.

The NFFO has also been sceptical of the discards ban, with Barrie Deas a particularly vehement critic. Deas even ventured into the lions’ den last summer to debate the reforms against Fearnley-Whittingstal on the BBC’s Newsnight, and said last month they were the result of “a toxic mix of political opportunism, misinformation, and cynical manipulation of legitimate public concern”.

Large scale discarding in EU fisheries at the time of the reform had been a serious problem, “but it was a problem that was well on its way to being eliminated; a point that our ministers, the EU and the Fish Fight Campaign chose to ignore”, he says.

Deas has accused lawmakers of bowing to “successful lobbying pressure from the NGO community”, and warns that the Landing Obligation and its requirements could threaten the viability of fishing fleets, and could become a bureaucratic minefield.

On the processing side, Birds Eye supports the Landing Obligation. But director of corporate and social responsibility Peter Hajipieris, questions why the EU did not run pilot trials first before implementing its first stage in January. Running these trials in local markets would “assess impact and thus inform how to implement with optimum effect”, he says. “The practical implications of the change for EU fisheries and the supply chains they serve were always going to be significant and thus difficult to predict.”

On the flip side, environmental charity Client Earth has called for even swifter reform. “We would have liked to see more species being brought under the landing obligation in the fisheries they are caught in sooner than is being proposed,” said science and policy advisor Liane Veitch.“However, it is still a big change in approach that means the TACs set each year will start to actually be that; limits on the fish that are caught, not limits on what can be landed, as in the previous regime.”

This should help improve data collection, which in turn should lead to more accurate stock assessments, and the adoption of more sustainable catch levels, Veitch says.

Notwithstanding these concerns, Fearnley-Whittingstall says the reforms to the CFP have also “helped change the way our supermarkets sell and label their fish to make sustainable choices easier for consumers”.

And he is firm in his belief that the campaign achieved positive goals, regardless of subsequent criticism. “In terms of impact, we can’t expect the ban to have an impact overnight,” he adds. “We are talking about decades of over-fishing in some areas, so it will take many years for the marine ecosystems to recover and to see the ban’s true legacy.

“The end objective of the revised CFP, and the discards ban in particular is not just to waste less fish, it’s to kill less fish, and then to waste very little of what we do kill, that’s how fish stocks will be rebuilt.”