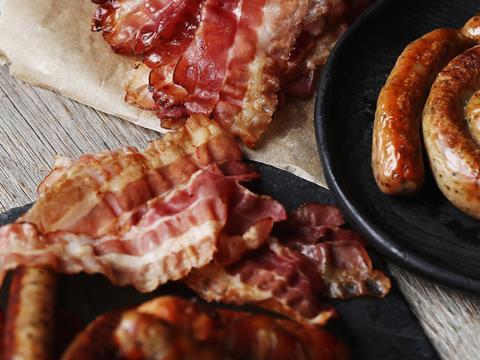 The AHDB has slammed a group of medical professionals over their “misleading” advice linking processed to meat to cancer, after they called for a ban on serving sausages and bacon in hospitals.

The Plant-Based Health Professionals group – which draws its members from across the NHS – has launched a campaign dubbed ‘give bacon the boot’, in a bid to persuade policymakers to impose a ban on processed meat and promote healthy diets.

The group has quoted the 2015 report by the WHO’s International Agency for Research on Cancer as part of its new campaign. The landmark study proved a person had as much chance of developing cancer if they ate processed meat as they would if they smoked or handled asbestos, it said.

“Processed meat, like bacon, causes harm and shortens lives,” the group said. “The NHS spends millions on treating people suffering with cancer, heart disease and type 2 diabetes. Then on the other hand it serves processed meat to patients and staff that can cause these life-threatening conditions.”

Removing processed meat would send a clear message to the public of the risks that these foods posed to public health, the group said.

However, Maureen Strong, a nutritionist with AHDB, said the IARC report looked at hazards only and to suggest otherwise was misleading. Most fresh sausages in the UK would not even fall into the category of processed meat, she added.

“It is a worrying that this small group of medical professionals, who people may look to for advice, are suggesting something that it is completely not true,” said Strong. “At best, they have misunderstood the report. At worst, it seems that they are pushing a lifestyle change which could have a negative effect on the health of some people.

“We should be able to expect our hospitals to respect the importance of the totality of scientific evidence to inform policy decisions. To suggest that the IARC report on processed meat implies that it causes cancer is wrong. IARC merely performed a hazard analysis, which in no way proves cause and effect,” she insisted.

“Whilst IARC has placed processed meat in the same hazard analysis category as tobacco smoking and asbestos, WHO does point out that this does not mean they are all equally dangerous.”

Processed meat was in the same hazard analysis category as HRT and contraceptive pills, both of which are prescribed by doctors and for which there is no suggestion of any change in behaviour, she pointed out.

“NHS administration should take note of this to avoid making ill-informed policy decisions which could mislead the general public.”