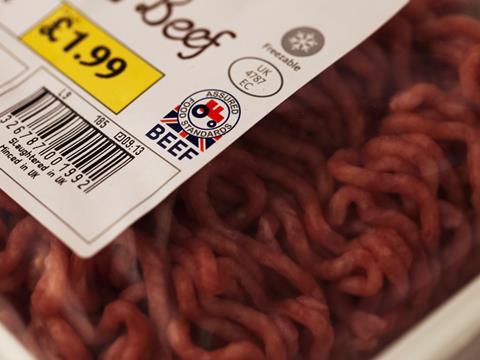 Shoppers have been stocking up on mince and avoiding other cuts, said the BMPA

A surge in demand for minced beef among locked-down British shoppers could ultimately lead to a supply crisis at the farmgate – with processors currently struggling to sell on more expensive cuts.

While the coronavirus crisis had driven massive demand from shoppers for red meat, they had generally avoided buying cuts such as steak and hind quarter, said the British Meat Processors Association this week.

Retailers had also simplified their ranges, it pointed out, leading to significant carcase balancing issues that were being exacerbated by a build-up of meat destined for the foodservice sector.

This meat wasn’t in a format retailers were willing to buy, said BMPA CEO Nick Allen. And though some processors had seen an increase in turnover from mince sales, the sector as a whole now faced “trouble” over the next two weeks, with a significant downturn in profit expected.

“The portion of an animal that’s sold as mince is typically not very profitable but is balanced out by selling more expensive cuts of meat,” Allen said. “Even if it is frozen, or retailers buy these other cuts to sell on promotion, it will be at a lower price that makes it unprofitable to continue processing – unless, that is, the price of livestock is reduced.”

If farmgate prices were reduced, beef farmers would struggle to sell their animals at a price that covered their costs, Allen added – leading to another profitability crisis across a sector that had faced already significant financial challenges in 2019.

“BMPA is calling on retailers to follow the example of some retailers who are closer to the carcase balance issues and work with us to help guide shoppers to not panic-buy and instead return to a more normal pattern of food purchasing,” Allen said.

“There is plenty of food to go around but, in order for the system to keep working, we need to maintain the mechanisms (like carcase balance) that allow it to function properly. If we don’t, then this time next month, we’ll be calling on government to intervene to fix a much more structural problem amongst farmers, livestock auctions and meat processing companies.”