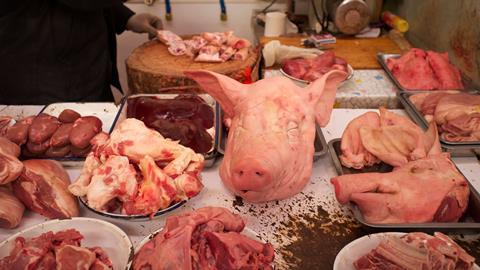 How badly is China’s ban hitting the UK pork sector?

China is showing no movement on reinstating imports of UK pork

Call it shifting priorities, call it moral integrity, but the UK has stepped up its condemnation of Chinese human rights abuses. Cases such as the suppression of democracy in Hong Kong and the Uyghur genocide in north-west China are not going unnoticed. Beijing, perhaps unsurprisingly, is answering with rebukes and retaliation.

British pork processors have found themselves unwittingly caught up in this geopolitical storm. It began last year when Beijing banned meat from foreign abattoirs experiencing coronavirus outbreaks, a fragile justification in itself given little evidence connecting Covid transmission with food. Yet now, with China still refusing to reinstate export licences despite British sites exhibiting a clean bill of health, some are left in little doubt the motivations are political.

“It’s all to do with Huawei and Hong Kong,” says a senior farming source, referencing the UK’s ban on China’s tech giant.

Last week, Pilgrim’s UK similarly blamed “political tensions” for the introduction of a three-day week at one of its abattoirs, claiming the site had become “financially unsustainable” because of China’s ban. Cranswick and QPL are also facing issues following outbreaks, and processors want £15m in government support as a result.

China says it will lift the ban once there is “sufficient evidence” the pandemic is under full control in the UK, but has shown little sign of doing so.

British processors expanded into the Chinese market as the country’s own pig herds were decimated by African swine fever in 2018. But now, as China’s herds show signs of recovery, its voracious appetite for pork is increasingly well met through domestic supplies and import volumes are expected to fall throughout 2021, according to Rabobank.

That’s bad news for processors here because China is not just an essential buyer of ‘fifth quarter’ cuts like trotters and heads but does so at a premium. Losing access to the country also means losing around £15 per pig based on what China will pay compared with other markets, says the BMPA.

Feed costs are a particular pressure. Soy and grain prices hit an eight-year high last week and now make up 75% of the cost of production, says Davies. With pork prices dropping 19% year on year, the majority of producers are operating at a loss.

The situation is so bad there are concerns over where the UK’s future pork supplies will come from. “It may be cheaper, cheaper, cheaper, and then there’s none,” says one senior industry source, noting 20 producers, farming 12,000 sows, have left the sector.

Davies suggests most shoppers won’t even notice if any major British supplier shuts. “Supermarkets will just import,” she says. “Especially Tesco and Asda, they’re the biggest retailers who import pork.”

But perhaps it won’t get to that. Shopper demand for pork continues to grow, according to Kantar, while a backlog of pigs due to Covid has now been cleared. Pork prices are consequently showing “signs of recovery”, according to April’s meeting of the UK Agriculture Market Monitoring Group of processors, farmers and government officials.

It may give UK producers and suppliers hope – even if China’s ire is yet to be quelled.