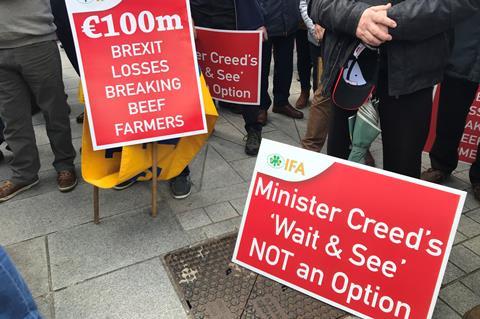 Blockades in front of processing plants, which in some areas had been in place for more than a month, ceased on Monday

The UK has been hit by beef shortages in the wake of farmer protests in Ireland.

Blockades in front of processing plants, which in some areas had been in place for more than a month, ceased on Monday 23 September after a deal was struck.

However, with 80% of Ireland’s beef processing capacity estimated to have been put out of action at one point, it has led to some shortages in supplies to the UK.

“We have not had dialogue from our membership saying, ‘we are really in trouble here’, but there have clearly been issues,” said British Meat Processors Association CEO, Nick Allen. “We are dependent on imports from Ireland. It is very hard to keep supply going purely based on British supply.”

It had not taken very long for supply issues to affect UK retailers and processors, Allen added.

However, he suggested the situation could have been significantly worse had Brexit stockpiles not been released on to the market to make up shortfalls of beef.

Tesco, which had two beef SKUs out of stock online this week, said: “We are working with our trusted supplier partners to avoid any shortages for customers.”

With a deal now in place, Irish beef supply chains should be fully operational by the end of the week, according to industry body Meat Industry Ireland.

“Beef processors are engaging with their customer base after this damaging period to seek to rebuild business,” said an MII spokesman.

“This will take some time as many customers have made their purchasing plans without Irish beef and committed to supply arrangements with alternative suppliers for at least the next number of weeks.”

Can the meat industry fight back against latest attacks?