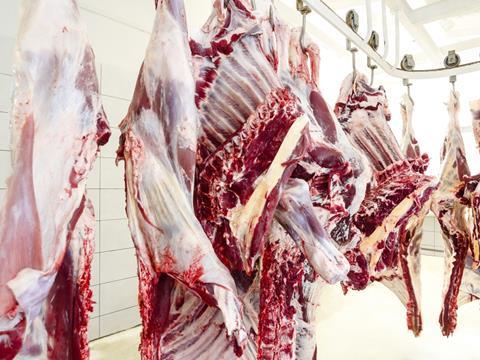 Exporters faced a series of unresolved barriers, warned a ‘stark’ letter to government by the meat sector

The CEOs of some of the UK’s largest meat and poultry processors have warned government inaction over post-Brexit export preparations means up to half of their £1.6bn export trade could disappear from 1 January.

In stark letter sent to environment secretary George Eustice calling for “urgent action”, the bosses of seven major processors including ABP, Cranswick and 2 Sisters – alongside major trade and farming bodies – warned a lack of progress on the sector’s chronic vet shortage, in addition to a lack of support on several other issues, meant the sector faced a “bleak” future.

An “exponential increase in red tape” meant companies would be placed at “a severe competitive disadvantage due to the new requirement to complete an Export Health Certificate for every delivery of animal origin product to the EU”, the letter warned.

And while accepting that ultimate responsibility sat on businesses to prepare to trade from the new year onwards, the group pointed to the fact companies “cannot begin to implement new systems and IT upgrades until after 18 December” to deal with the new customs certification process.

This was the date when the EU’s Standing Committee on Plants, Animals, Food and Feed was due to meet to fix the details of the precise health requirements with which British companies would need to comply – leaving companies just six working days “over the busiest week of the year” to implement whatever was necessary before 1 January.

However, it was already “too late to implement some of the likely requirements, an example of which is the need for testing and declarations to certify animals and processed meat are free of trichinella”, they warned.

And in the case of vets, the sector was facing a “resourcing crisis”, despite the doubling in the number of official veterinarians from July 2019 to September 2020, with not enough personnel to provide whatever certification was required.

The government was urged to “take more decisive policy action to both increase certification resource and to use its authority to simplify the export process”.

This would be achieved by redeploying official vets employed (directly or indirectly) by the FSA or other government agencies to support the export certification process.

It should also use the APHA to simplify guidance for official vets as they certified products for export, the letter said, and revise the rules on what inspection and verification must be done by an official vet, and what can be done by an appropriately trained and supervised certification support officers.

“Unless government now steps in with these robust interventions, we may have gone beyond the point that these issues can be fixed and a significant loss of business for the meat industry may now be inevitable,” they warned.

Such a prospect could ultimately plunge the sector into a fresh carcase balancing crisis as seen earlier this year, due to the lack of access to export markets for cuts of meat not consumed on the home market.

The warnings follow the publication of a separate letter to government, sent by 29 trade associations this week, which warned the vet shortage could mean meat and dairy exports to the EU fall by up to 75% early next year.

In response, a Defra spokeswoman said: “We are working hard to ensure we have enough vet capacity post transition period, and expect we will have the numbers needed to ensure that the food industry can take advantage of the opportunities and changes that the UK’s new chapter will bring.

“We have doubled the number of official veterinarians qualified to sign EHCs for animal products since 2019, and we are providing funding for surge capacity veterinarians as short term support for the end of the transition period.”