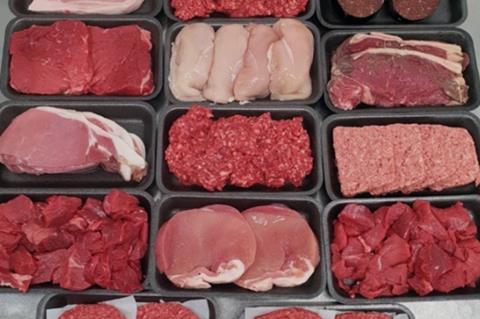 The initiative is aiming to prevent more than 150,000 tonnes of meat, worth £1.5bn, from ending up as waste each year

Thirty-eight of the UK’s largest organisations involved in the production and sale of meat have teamed up for a new initiative that aims to halve the £3bn-worth of meat that goes to waste each year and cut greenhouse gas emissions.

All the UK’s major retailers, along with major hospitality and foodservice companies, industry bodies and meat processors representing 80% of UK production have signed up to the Meat in a Net Zero World plan. Launched this week, it has been developed under the auspices of the Courtauld Commitment 2025 to tackle food waste, and facilitated by waste reduction charity Wrap.

Wrap estimates about 380,000 tonnes of meat intended for consumption goes to waste each year, three-quarters of which is in homes. The greenhouse gas emissions associated with this uneaten meat measured more than four million CO2 equivalents, it said.

Meat in a Net Zero World is aiming to prevent half of that wasted product, representing more than 150,000 tonnes or £1.5bn-worth of meat, from ending up as waste each year before 2030. Doing so would make “a significant contribution” to the government’s net zero emissions target by 2050 and the NFU’s target for the agriculture sector to hit net zero emissions by 2040, it said.

Wrap report calls for economy to be rebuilt with more sustainability

Signatories have agreed to a raft of commitments, from tackling meat waste in retail to using packaging innovations, improvements in forecasting and stock control and greater redistribution, to the support of campaigns raising awareness of household food waste.

The group has also agreed to adopt a consistent approach for measuring emissions with common metrics, to sign up to the UK Roundtable on Sustainable Soya, and for processors to commit to improve their energy efficiency and reduce water stress, in addition to reducing waste in processing plants.

Wrap said the initiative would also lead to the “widescale adoption of best practice labelling and storage guidance on poultry, pork, beef and lamb products, as well as extending product life, optimising pack size and encouraging freezing and the use of leftovers”.

It added participating companies would be held to account through regular public reporting on the plan’s progress.

“This collaboration will go a long way to supporting the NFU’s vision of net zero agriculture by 2040 and British livestock farmers are ready to play their part,” said NFU livestock board chairman Richard Findlay.

“When it comes to primary production, having a shared goal and strategy will help make sure all livestock farmers are moving in the right direction.”

Increasing efficiency and reducing waste along the meat supply chain was “of paramount importance to the sustainability of the sector”, added British Meat Processors Association policy technical manager Anna Proffitt.

“We fully support Wrap in bringing the meat supply chain together to undertake such important work, and are pleased that many of our members are signatories and active participants of Meat in a Net Zero World. We look forward to working closely with Wrap and members in driving the common objectives forwards.”

Retailers recognised the “key part they have in tackling climate change and the leverage they can use to help reduce the environmental impact of the materials and manufacturing processes in our everyday products”, added BRC sustainability policy advisor Leah Riley Brown.