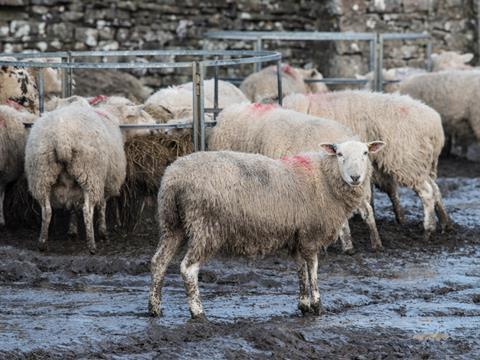 Slow grass growth, compounded by a shortage of fodder since the turn of the year, had affected ewe and lamb nutrition

Soaring lamb mortality rates caused by months of wet and cold weather have created a “shocking” lambing season across the UK, which could have serious implications for lamb supply.

This year’s season was “as bad as we can remember”, said NFU chief livestock adviser John Royle, with the late spring hitting lamb production hard.

With tightened UK supplies exacerbated by a shortage of New Zealand lamb, average year-on-year deadweight lamb prices were up 46% to 601.9p/kg on 14 April [AHDB]. These prices could climb even higher, suggested Royle, and could ultimately lead to a hike in retail prices in the longer term, with less new season lamb expected to hit the market later this year.

Slow grass growth, compounded by a shortage of fodder since the turn of the year, had affected ewe and lamb nutrition, making them more susceptible to disease, said National Sheep Association CEO Phil Stocker.

As a result, year-on-year lamb mortality was up 40% in Scotland and by 25% in the north west of England, Stocker said, while national levels were up 10%, leading AHDB to forecast a 3% decline in 2018 new season lamb numbers.

While the sheepmeat sector often had to contend with challenging lambing in isolated areas, 2018 was different as the majority of the UK had been affected by the poor weather.

“The combination of fallen stock and slow growth, plus moves by some farmers to slaughter early or scale back on production, could also affect next year’s supply,” Stocker said, as breeding stock would be taken out of the system.

“It’s difficult to say whether the supermarkets will push up prices, but with these shortages and a lack of supply from New Zealand, I think we will see an increase in prices.”