In 2015 Nestlé chairman Peter Brabeck said 3G and Warren Buffett had “pulverised the food industry through serial acquisitions and ruthless cost cutting”. He was on the money, as the creation of Kraft Heinz and the implementation of aggressive zero-based budgeting has stirred up a chill wind both sides of the Atlantic. 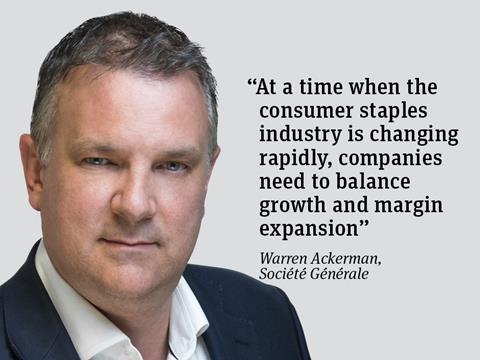 Companies such as Mondelez and Unilever copied some of its tactics, partly to avoid being the next victim. Unilever CEO Paul Polman called Kraft Heinz’s $143bn (aborted) bid for Unilever a “near death experience” and derided Kraft Heinz’s model as unsustainable. Even so, Unilever acted quickly by doubling its forecast margin growth and announcing a share buyback. The shares have responded and are up over 30% year to date. We doubt Kraft Heinz will come back for Unilever, but with its margins seemingly peaking at about 30%, Kraft Heinz needs its next acquisition sooner rather than later to extract more synergies. Alternatively it needs to start investing more for growth and accepting lower margins.

At a time when the consumer staples industry is changing rapidly, companies need to balance growth and margin expansion. For investors, companies that can deliver both are prized and awarded the highest valuations.

One big debate is around media spend. Over the years, analysts have regarded lower media spend as a negative sign: indicative of under-investment and a low quality way of meeting profit targets. However, this view may require reassessing as companies switch to cheaper digital media, which gives better analytics without diminishing voice. Unilever plans to cut the number of adverts it makes by 30% and will run adverts for longer if they work well. This is not great news for the big media agencies like WPP.

In the end, our call is that consumer staples industry growth should improve from current anaemic levels, but this may require a new corporate mindset regarding portfolio, organisation and culture-and maybe a dose of luck.