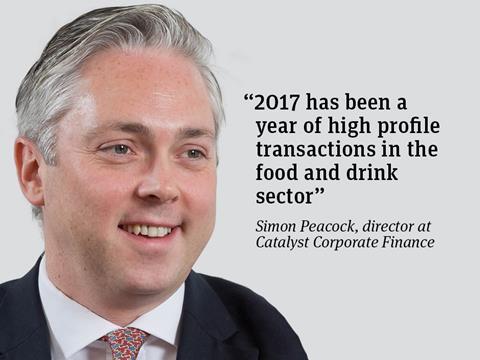 What are the key trends that have underpinned M&A activity in the food and drink industry during 2017 and what is the outlook for 2018?

M&A volumes in the food and drink sector have remained relatively consistent over the past three years, although 2017 has seen a slightly lower level of deals than 2016 or 2015. So far this year 66 deals have been completed, 55 by food businesses and 11 by drinks businesses. This compares to 77 deals in 2016 and 88 in 2015.

However, 2017 has been a year of high profile transactions in the food and drink sector. Catalyst directors Simon Peacock and Charles Lanceley have identified some of the year’s most significant deals, each of which illustrates trends that have underpinned M&A activity in food and drink during the course of 2017.

The sports nutrition company was bought out this year by private equity firm Lion Capital in a deal valuing the business at £72m. Grenade was founded in 2010 by Alan and Juliet Barratt, who subsequently sold a stake in the company to Grovepoint Capital in 2014, which at the time valued Grenade at £35m. Back then Grenade offered just six products which were primarily sold through specialist retailers.

Looking ahead, the company has launched a variety of new products, including its ‘Carb Killa’ range of high-protein bars and drinks. It has also expanded distribution into mainstream convenience and grocery channels in the UK and abroad, meaning its products are now sold in more than 100 countries. This is a great example of a business on trend, exporting overseas and being valued at the top of the market.

UK cereal brand Weetabix was snapped up by the US company Post Holdings in a deal worth £1.4bn. The breakfast cereal favourite, made in Britain since 1932, was put up for sale in January by China’s Bright Food, which took a majority stake in 2012.

Weetabix is made in the small town of Burton Latimer, near Kettering, Northamptonshire, and will become part of America’s third-largest cereal company. The Weetabix portfolio includes Alpen, the No 1 muesli brand in the UK, Ready Brek, and Weetos. While it has some overseas manufacturing plants, all of the wheat that goes into Weetabix biscuits is grown within 50 miles of its base in Burton Latimer.

The deal is an example of a huge cross border deal that succeeded where an earlier deal did not. When Shanghai-based Bright Food bought Weetabix, it had hoped the cereal would become popular in China as part of a general trend towards more western eating habits. However, while sales of Weetabix have risen in China, market share has disappointed as traditional rice and steamed bread remain popular breakfast staples.

In 2017, independent craft brewer, BrewDog, sold 23% to TSG Consumer Partners, in a £213m transaction, including £100m to fund BrewDog’s continued global expansion, with the balance of proceeds to provide for early shareholder liquidity. The transaction valued BrewDog plc at approximately £1bn enterprise value.

TSG Consumer Partners is a San-Francisco based leading strategic equity investor in high-growth consumer brands. TSG was founded in 1987 and has helped over 70 brands grow, including successful investments in global brands like Vitamin Water, Think Thin, Popchips and many others.

The deal is a great example of a successful crowd funded growth story going global with both a US investor and overseas export. At a £1bn valuation, craft beer fans that invested in Equity for Punks IV, which closed in April 2016, have seen the value of their shareholding increase by 177% in just one year.

Headquartered in Nottingham, Addo produces more than 287 million packs of chilled savoury pastry products every year. The business manufactures a range of own brand and branded products including sausage rolls, hot pies, slices, pork pies, scotch egg products and quiches, which it supplies to the UK’s leading names in food retail including all the major supermarkets.

The deal is a great example of a long held and heritage business doing the right deal, at the right time. The business was in a challenging position following Northern Foods disposal, but grew under Vision’s stewardship, including the acquisition of Kerry’s chilled division. With LDC’s backing, it is now poised for a new phase of growth that requires re-investment. This fits LDC’s model and management’s appetite at a point where private label businesses such as Addo are in favour with retailers.

Unilever, owner of PG Tips and Liptons, increased its presence in the herbal tea market by acquiring Bristol-based Pukka Herbs this year. Sebastian Pole and Tim Westwell, founders of the brand known for its exotic flavours such as turmeric gold and mint matcha, as well as cleansing and detox teas, sold the business to Unilever for an undisclosed sum. The pair have agreed to stay on to help drive global expansion.

The sale initially raised fears that the independent ethical brand would lose its values after being taken over by a transnational corporation. But Pole said Pukka had agreed “solid iron-clad commitments” from Unilever to stand by its ethical standards including 100% organic, “fair for life” Fairtrade and FairWild accreditation for wild collected herbs.

The deal is a great example of a global giant making a small but strategic acquisition in a niche area, and promising to keep the business ethics intact.