Mondelez adds to UK snacking portfolio with acquisition of Grenade 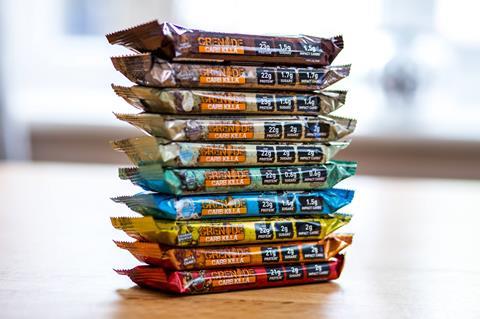 Cadbury owner Mondelez International has swooped for performance nutrition business Grenade to add to its armoury of British snacking brands.

The terms of the deal were not disclosed but Mondelez’s significant majority stake is understood to have valued the protein bar supplier at around £200m.

Grenade, which makes high-protein snack bars, shakes and spreads, has grown rapidly in recent years as it moved into the mainstream with listings in the major mults.

Founded by husband-and-wife team Alan and Juliet Barratt in 2009, the business was first acquired by Grovepoint Capital in 2014 for £35m before changing hands in a £72m deal headed by current owner Lion Capital in 2017.

E-commerce sales have rocketed during the pandemic and now account for a quarter of the group’s total turnover.

The business has also grown its presence outside of its domestic UK market, with international sales in the likes of North America and Asia Pacific up 27.6% in 2019 to £13.2m.

Lion Capital had hired US investment bank Harris Williams to handle a potential sales process in late 2019 but the process was disrupted by the coronavirus outbreak in the early parts of last year.

“This is another exciting opportunity to deliver on our strategy to be a global leader in broader snacking, including in the important area of wellbeing.”

“This partnership with Mondelez International gives us access to enormous resource and capability to help make those aspirations a reality and I couldn’t be more excited about our future growth and continued innovation.”

Mondelēz said it planned to operate Grenade separately to “nurture its entrepreneurial spirit and maintain the authenticity of the brand”, while providing resources, support and international scale to help accelerate growth.

The current senior leadership, including Alan Barratt, will continue to run the business from its headquarters in the UK and will retain a minority equity interest in the company.

The deal is expected to close by the end of March.