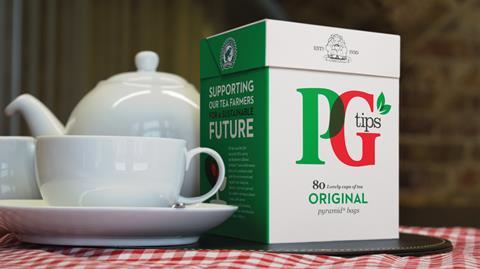 Unilever has initiated a full strategic review of its global tea business, which could lead to a sale, despite its pledge two months ago to keep the brands.

In November, the fmcg giant denied media reports it was preparing a unit sell-off - including PG Tips and Lipton - suggesting it would rather push the brands into high-growth areas such as herbal tea, where its premium brand Pukka is “performing well”.

However CEO Alan Jope said this week “all options remained on the table” for the underperforming unit, after formally triggering a review.

“Our tea business has a disproportionately large footprint in black tea which is slower-growing,” he added. “Tea has a long track record of being dilutive to growth and margin, so this strategic review announcement means we want to investigate how we can best create value for stakeholders.”

Jope compared the tea division to Unilever’s former spreads unit, which was sold to private equity giant KKR in 2018 for a whopping €6.8bn.

City sources have previously argued a private equity buyer would be the most likely contender for Unilever’s tea division. However, given Lipton’s ties with PepsiCo - through a US joint venture in iced tea - a trade sale remains an option.

Russ Mould, investment director at AJ Bell, said it was “little wonder that Unilever’s tea brands are poised over the rubbish bin”, after sluggish growth dented the company’s annual results.

Meanwhile, fellow tea player Typhoo has conducted an ongoing fundraising round backed by its majority shareholder after slumping to a multimillion annual loss amid a slump in demand for the traditional cuppa.

The tea brand, formerly owned by Premier Foods, raised a total of £5.1m in six rounds of equity fundraising since September.

CFO Paul White told The Grocer Typhoo was undergoing the fundraising round in order to “drive future growth and long-term vision for the business”.

Its latest accounts, to the end of March 2018, showed it slumped to a £20m annual loss after what Typhoo described as “one of the most challenging trading periods in recent history”.