Shares hold steady in a 2017 dominated by M&A activity 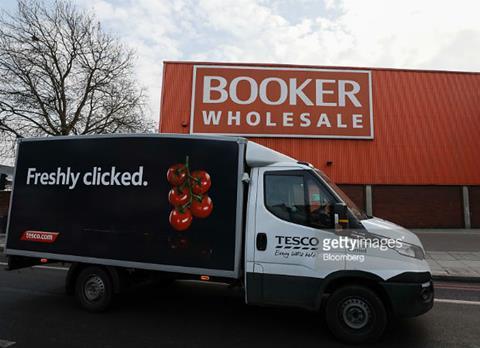 The economic and political fallout from Brexit and a Trump White House reverberated throughout last year, though London’s blue-chip FTSE 100 closed 2017 at an all-time high for the second year in a row, as sterling’s fall boosted stocks with strong international trade.

Creeping inflation and the battle to pass on rising raw material costs - also stemming from the pound’s collapse since the EU referendum - presented major challenges for the food and drink industry. However, the majority of UK grocery and fmcg firms tracked by The Grocer performed remarkably well in a tumultuous year dominated by M&A activity, successful execution of transformative acquisitions and continued organic growth.

Posh mixer brand Fever-Tree finished as the best-performing stock for an astonishing third year in a row, with a market cap of £2.6bn, compared with a float price of £154m in November 2014. The City darling upgraded its profit forecasts for the fifth time in 12 months in November thanks to strong growth in the UK and ended the year with its eye firmly fixed on further US expansion in 2018 after establishing a New York office.

Conviviality also impressed the market in 2017 integrating not one but two game-changing acquisitions seamlessly to create a dominant player in the retail and wholesale drinks industry. Although it snapped up Matthew Clark towards the back half of 2015 and Bibendum the following May, there was a considerable execution risk for the Bargain Booze owner. However, the share price is now up from 155p pre-Matthew Clark and the group is valued at more than £700m.

“Impressive jumps in Conviviality’s share price were driven by smart execution of [CEO] Diana Hunter’s strategy and proof of delivery,” says WH Ireland analyst John Cummins. “She has delivered exactly what she promised and the market responded positively to evidence of the synergies coming through and future growth opportunities.”

The coming together of retail and wholesale sent shockwaves through grocery when Tesco revealed plans in January for a £3.7bn merger with Booker.

Shares in the two businesses jumped on the announcement but spent much of the year in limbo as the market held its breath for a verdict on the deal by regulators.

“For much of year Tesco has been under the eye of the regulators looking at the impact of the Booker merger,” says HSBC head of consumer retail David McCarthy. “Shares tend not to do much under these circumstances, but improved massively once these restrictions were lifted.”

With the CMA waving the deal through in November, Booker closed the year up 32%. Tesco rose just 1.4% over the year, but McCarthy points out shares jumped 25% from 167p in mid-July to 209p at the close of the year, after it was caught up in the fallout from an even bigger M&A deal - Amazon’s £13.7bn acquisition of US grocery chain Whole Foods Market - which wiped more than $11bn (£8.6bn) off the value of the world’s largest supermarkets and food and drink suppliers.

With value to the fore, the share price of discount chain B&M Bargains also soared, along with sales and profits, as new stores opened apace and it also bolstered its food offering with a surprise £152m swoop on frozen chain Heron Foods.

“It has crept up the rankings by stealth, but with a fair wind B&M should get into the FTSE 100 index this year and may also benefit from the problems of Poundland,” says retail analyst Nick Bubb. “A fair target for B&M would be to overtake M&S in market cap terms in 2018.”

However, retailers didn’t all fare quite so well, with M&S crashing following a good start to the year. The high street bellwether was dragged down by the collapse in consumer confidence that also laid Debenhams, Mothercare and Dixons Carphone low. More worryingly, the jewel in the M&S crown - its food business - faltered ahead of the key Christmas period. The group revealed in November that logistics issues together with the effects of absorbing food inflation to remain competitive had squeezed margins in the first half more than expected.

Sainsbury’s also suffered in the back half of the year as it revealed a further decline in profitability in November. Its shares ended the year 3.4% down. Morrisons also fell 4.4% but David McCarthy of HSBC points out the Yorkshire-headquartered grocer had leapt more than 50% in 2016 thanks to a Dave Potts-inspired recovery. McCarthy adds the supply agreement with McColl’s (which saw shares in the convenience retailer fly, following an earlier deal to acquire a big tranche of unwanted Co-op stwores) will bring long-term benefits to Morrisons, but a resurgent Tesco remained a worry.

“There was continued pressure on the food retail industry in 2017 stemming from the growth of the discounters, the recovery of Tesco and adverse differential inflation,” he says.

Ocado also escaped sector gloom and doom, despite being one of the most shorted stocks on the market. The online grocer rocketed 70% in November after it finally unveiled its first international partnership, in a deal with French group Casino.

On the supply side, the surprise £115bn tilt made by Kraft Heinz towards Unilever sent shares in the Marmite, Knorr and Magnum maker rocketing 14.5% to a record high in February. Despite Kraft Heinz beating a rapid retreat in the face of a wave of opposition to the deal, the Unilever stock continued to rise as the City awaited the £6bn sale of its spreads division and CEO Paul Polman unveiled a new strategic plan in April. The share price ended 2017 more than 25% higher at 4,125.5p.

Own label protein suppliers Cranswick and Hilton both put in strong performances yet again last year (up 36% and 42% respectively), aided by expansive acquisitions. In the case of Cranswick that involed a move into chicken and the acquisition of Dunbia’s pork business, while Hilton continued to win a larger share of Tesco’s business but also dipped its toe in the fish market thanks to the takeover of Seachill.

“An increased focus on product development and an ability to grow volumes through NPD, taking them into a broader product space, has helped two of the best performing suppliers,” says Charles Hall, head of research at Peel Hunt.

He adds that 2017 was generally about how suppliers coped with and passed on inflation in a timely and effective manner, with some supermarket partners struggling to absorb the costs.

Bakery group Finsbury Food was hit by spiking butter prices, while Premier Foods shares collapsed on a disastrous second quarter as the Mr Kipling maker struggled to recover input cost inflation and ditched its medium-term growth target. And Real Good Food flailed from profits warning to profits warning in a crisis that saw executive chairman Pieter Totté and finance director Dave Newman jettisoned from the business, with heavy losses stemming from a delay in passing on inflation and poor cost controls.

Sandwich maker Greencore suffered a miserable run from March to the end of November as investor worries on its fortunes in the US weighed on the stock, which was down 30% until annual results allayed fears. The dip was no reflection on its stellar UK performance where it continued to fly in the booming food-to-go market (where Greggs was another beneficiary).

“Greencore bounced back after management addressed some of the US issues and there was also recognition by the market that the concerns were real but also overdone,” Hall says. “There is a greater faith that the acquisition of Peacock will actually deliver for shareholders over the longer term, whereas there was lots of concern mid-way through the year.”

Prepared foods also provided the stock market with its first food business IPO since Fever-Tree in 2014 as ready meals giant Bakkavor floated in December. The move was not without its drama, with the £1bn float coming one week after Bakkavor pulled the plug on the listing, blaming market “volatility”. But the group was persuaded to come back to the market by disappointed institutional investors, albeit at a lower price of 180p a share.

As for the biggest faller of the year, Crawshaw investors are still waiting for a recovery to kick in following a tie-up with 2 Sisters in May as first-half losses widened. Shares in the value meat retail chain have sunk almost 90% from a peak of 95p at the end of 2015.