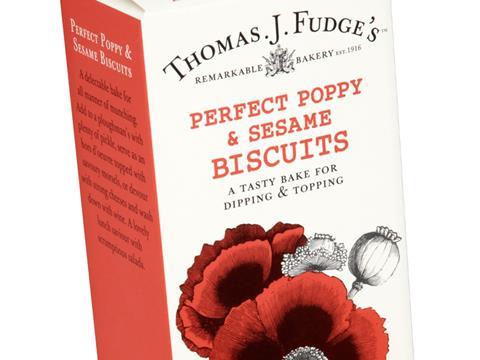 Biscuit maker Thomas J Fudge’s Remarkable Bakery is working with corporate adviser Grant Thornton on a potential sale of the business, The Grocer can reveal.

Options being explored include attracting external investment to back the family-owned business’ growth plans.

“Thomas J Fudge’s is working with advisers with the aim of growing the business further,” confirmed Trefor Griffith, head of food and beverage at Grant Thornton. “As a result of significant investment in the brand over the past three years, the business has enjoyed strong growth and has developed ambitious targets for the immediate future – designed to ensure it remains a leader in the category.

“GT has been working with the company on its long-term growth plans, in particular advising on additional funding sources to support its accelerated growth agenda.”

Thomas J Fudge’s has just completed stage one of a major shake-up of the brand, which has been ongoing for more than two years, changing the name from Fudges, revamping its packaging and website and introducing a number of new savoury and sweet product lines.

A new five-year plan is aiming to quadruple sales and profits to close to £40m and £4m respectively as it expands further into foodservice and looks into exporting. The Dorset business already has a major presence in Waitrose and has listings with most of the major retailers.

MD Stephen Fudge – part of the third generation of the Fudges family – said the company was “very healthily financially stable” but it couldn’t rely on internal resources for such an ambitious plan. “We are using the resources of GT to maximise the growth opportunity the family want from the business,” he added.

He refused to be drawn on specific plans, but didn’t rule out selling a majority or minority stake to a private equity firm: “It could be a PE investment but moving forward it is about what is right for the business to achieve our goals.

“We have always been very open to what the opportunities are and we have some great plans moving forward. If something like PE is going to help then we may look at it but at the moment it is about internal resource and maximising what we have got here.”

Thomas J Fudge’s has also been working closely with the Manufacturing Advisory Service, which is a partner of GT, to help internal training and improve the manufacturing operations at the business.

Advice from GT also led to the recruitment of a new commercial director at the company, who Fudge said was “instrumental” to the new growth plan. Paul Vita joined Thomas J Fudge’s in July after spending eight months working as marketing director at TePe and the chilled and frozen division of Hain Daniels on an interim basis. His career working in the fmcg industry has also included spells at Lyons Seafood and Pukka Herbs.