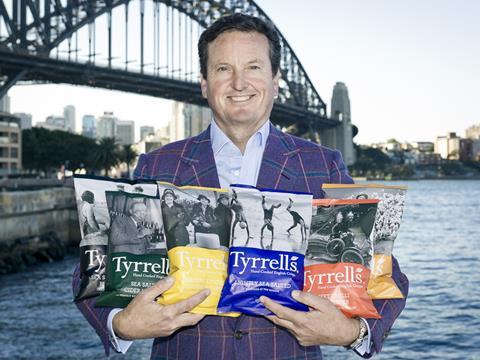 Tyrrells has bought Yarra Valley, which makes upmarket, organic crisps and snacks, for an undisclosed sum and will start to manufacturer Tyrrells-branded crisps from their factory in Victoria.

Tyrrells CEO David Milner told The Grocer the location will become “an Asia Pacific hub” and will enable the brand to sell higher volumes through the region and into markets including China and Thailand.

Yarra Valley’s existing management team will remain at the company to oversee Tyrrells’ business in the region.

He said given the success of the Coles deal in Australia and the logistical challenge of exporting the UK-manufactured products over that distance, Tyrrells wanted to set-up a manufacturing base in the country.

““Tyrrells is becoming a more international business,” he said. “From almost nothing five years ago today 25% of our sales are outside the UK and that’s provided a real growth engine for us”.

“The next stage, rather than just doing export, is to become a genuinely international business with manufacturing capabilities in other markets. This is Asia Pacific done, and the next stage will obviously be elsewhere.”

International revenues were £8.8m in the year to 28 March 2014 and the Yarra Valley deal will make Australia its biggest export market within a year, overtaking France.

Tyrrells said it was heading for retail sales value of £160m by the end of its financial year to 28 March 2015, with its international business growing faster than domestic sales. Non-UK organic growth likely to be in the region of 30%.

Milner said it would look at the possibility of importing some of Yarra Valley’s product lines into the UK and what other Tyrrells ranges would potentially be suitable for the Australian market.

The deal is the first major acquisition since Tyrrells was bought by Bahraini private-equity fund Investcorp for £100m from Langholm Capital in August 2013.