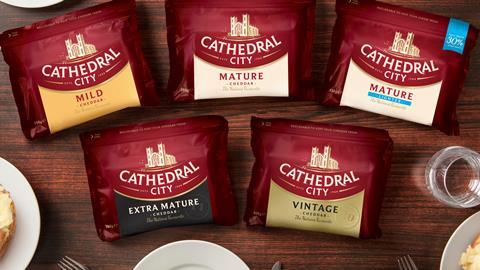 What does Dairy Crest's sale mean for the future of UK dairy?

Can Dairy Crest really remain ‘passionately British’ in Canadian hands? Or does the deal mark the ‘death of big British dairy’?

Dairy Crest CEO Mark Allen was in buoyant form last Friday as the shock sale of the Cathedral City owner to Canadian dairy giant Saputo was announced in a near-£1bn deal.

But despite the plaudits aimed at Allen for securing what has been widely recognised as a “strong” valuation for the business, the deal marks the sale of yet another major British-owned dairy company to a foreign multinational.

Read more: Who owns the dairy industry? The top 10 players in the UK

After the acquisitions of Milk Link, Robert Wiseman and McLelland by Arla, Müller and Lactalis respectively during the past decade-and-a-half, Dairy Crest was one of the last of the UK’s big dairy processors in British hands.

So why has another overseas buyer swooped, what does the deal have to do with Brexit - and what does it mean for the future of Dairy Crest and UK dairy?

It’s been no secret Dairy Crest has been open to offers ever since it sold its loss-making liquid milk division to Müller in 2015. The supplier had become hugely profitable since the sale of its milk division, but against the background of global consolidation in the sector, the much smaller branded cheese, fats and ingredients-focused business “stuck out” says Shaun Browne, MD at corporate finance broker Houlihan Lokey.

At various points over the past five years, the likes of Lactalis and Müller were linked to a possible deal, but industry experts say it’s no surprise Dairy Crest ended up going to an overseas buyer - especially given its status as a publicly listed company. After all, being listed means Dairy Crest’s shares “could have been owned by anybody” says NFU dairy board chairman Michael Oakes.

A series of mergers also mean UK dairy’s biggest players have been whittled down to two dominant forces, in the form of Arla and Müller. Given there is no longer a UK-owned player of significant scale, “a UK buyer for Dairy Crest just wasn’t going to happen” suggests John Allen of Kite Consulting. “This deal is symptomatic of the globalisation of the sector.”

“This deal is symptomatic of the globalisation of the sector”

This lack of a potential UK buyer and Dairy Crest’s sale to a Canadian company have led some sources to suggest we are witnessing the “death of big British dairy”. In the wake of the deal, ingredient specialist Meadow Foods is now the largest UK-owned dairy processor, followed by Northern Irish dairy co-op Dale Farm.

He also stresses Saputo is in the UK for the long haul and committed to Dairy Crest regardless of what happens with Brexit.

Indeed, industry commentators are playing down a link between Dairy Crest’s sale and Brexit, apart from the fact the UK “is a great place to buy and the currency situation is favourable” for overseas buyers, according to Allen of Kite Consulting.

Farmer representatives, too, seem unperturbed by Dairy Crest’s sale. Saputo’s significant investment “suggests it is taking a long-term view” and can see through the current Brexit impasse, says Oakes. And whether a company is UK or overseas-owned “doesn’t matter” in the grand scheme, he insists. “What’s more important is its growth and investment strategy. At a time when areas such as the car industry are going the other way due to Brexit uncertainty, it’s a positive development.”

Wyke Farms MD Rich Clothier agrees: “It’s slightly surprising they’ve invested now, but that probably illustrates they believe things will get on once all the Brexit disruption settles.”

First Milk CEO Shelagh Hancock echoes this. “It demonstrates the strength and value of the UK as a very attractive consumer market,” she suggests, while the level of investment in the business, particularly against the backdrop of Brexit, demonstrates “a real confidence in the UK dairy industry”.

Saputo’s investment is also “an indication of just how well regarded cheddar is as an export product” adds Clothier. “Kerrygold is among the biggest butter brands in the US, so why can’t Cathedral City also be a success in that market?”

This is an area that clearly excites Mark Allen. After investing £70m at its Davidstow plant to boost exports last year, the sale to Saputo will accelerate Dairy Crest’s plans to build an overseas presence, he says.

“Virtually all our brand exports (representing just 2% of our turnover) goes to Europe,” Allen points out. “We think there is big scope for growth into the US and Canada. Not only does Saputo have a strong balance sheet, it also has access to markets around the world, meaning we will have a ready-made sales force.”

Saputo will have been interested in Dairy Crest not just because of the potential of Cathedral City, but also because of its other big brands Clover, Country Life and Fry Light, suggests a senior industry source. “Not to mention its ingredients business, which has synergies with Saputo’s own operation.”

But Saputo also has a reputation as a business that’s very cost-focused, claims another industry source. “They will want to extract value after such a big investment, so suppliers to Dairy Crest may need to be prepared to renegotiate terms.”

“They will want to extract value after such a big investment, so suppliers to Dairy Crest may need to be prepared to renegotiate terms.”

We could even see further incursions into the UK, suggests a third source. “Saputo is a portfolio player, so it will lead to speculation over their interest in the UK. Could they also look at areas such as yoghurts and liquid milk?”

Dairy Crest’s Allen is coy on Saputo’s specific plans. No decision has even been made on a name yet, he says. “There are plenty of people in my own business who think we should look at our name. Ultimately, it’s the names of the brands that are really important.”

Whatever the business is called, it’s clear Saputo is here to stay in the UK, and could well shake up the status quo.