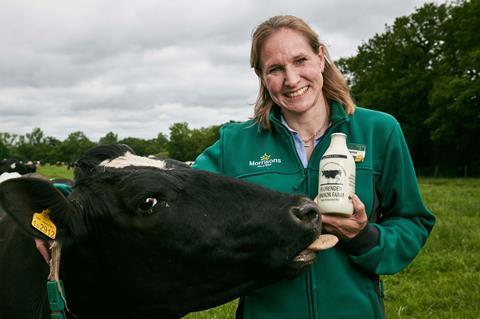 Morrisons is reintroducing the glass milk ‘pinta’ in a move to help customers reduce their use of plastic.

The retailer has brought back the traditional pint to 11 stores, priced at 90p, and said it was in talks with dairies to roll out the bottles nationwide.

The price compares to a current 50p for a pint in a plastic bottle from the retailer, going up to £1.50 for six pints.

However, Morrisons said it hoped to attract purchases from customers who had a sense of nostalgia for the past, when most households received their milk in glass bottles from the milkman, as well as a desire to reduce their plastic consumption.

It claimed the introduction of traditional glass milk bottles would remove 40,000 plastic bottles from these Morrisons stores per year as well as reduce CO2 emissions – as delivery from local suppliers means milk covers shorter distances.

The bottles are available in seven trial stores across Kent and four stores around the Sheffield area and will be delivered directly to Morrisons supermarkets by local dairy farms. Once returned they will be sanitised and can be reused for 10 years or more.

Morrisons has set a target of a 50% reduction across its own-brand primary plastic packaging by 2025.

“We want to help our customers live their lives with less plastic,” said packaging manager Natasha Cook. “Reusing glass milk bottles is an easy leap for many people to make because they remember this was how milk used to arrive on the doorstep.

“We’re currently talking to other local dairies and hope to be able to roll out glass milk bottles across the country.”

Steve Hynd, policy manager from environment campaign group City to Sea, said: “Milk is a prime example of a product that could and should be swapped from single-use plastic bottles to planet-friendly reusable bottles.

“It is great to see Morrisons pioneering the process of delivering milk in reusable bottles in supermarket stores.