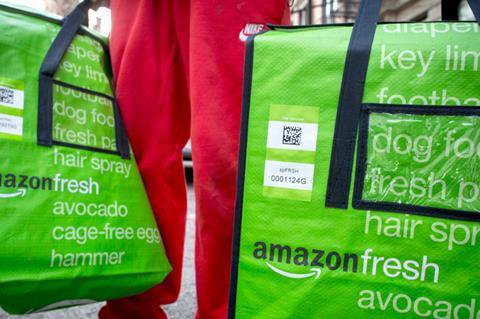 A senior figure from Tesco who is a veteran of retail transformation has joined Amazon as the tech giant prepares to step up its UK grocery operations.

His LinkedIn page shows he has left the supermarket to take a role with responsibility for ‘special projects’ at Amazon.

The Telegraph reported at the weekend that Amazon was planning a UK-wide push of its fresh grocery delivery service, citing a surge in recruits.

Amazon Fresh launched in the UK in 2016 but the same-day delivery service remains limited to London and a selection of postcodes in the home counties.

About a third of the current Fresh UK team appear to be new employees, according to the Telegraph.

Over the past month, six new roles have been advertised, with job posts describing Fresh as an operation Amazon seeks to grow in Europe.

Russell Jones, a former account director at Procter & Gamble, was appointed UK country manager for Amazon Fresh and Prime Now in December, after holding a number of other posts at the tech giant over five years.

Current UK vacancies include Amazon Fresh and Prime Now marketing specialist, advertised in a job post that reads: ‘Do you want to be part of Amazon’s growing online grocery proposition?’

Amazon is also set to open new physical grocery stores in the UK. The Grocer revealed last month how space had been secured in central London for the UK’s first Amazon Go stores, where customers are automatically charged for their shopping when they leave.