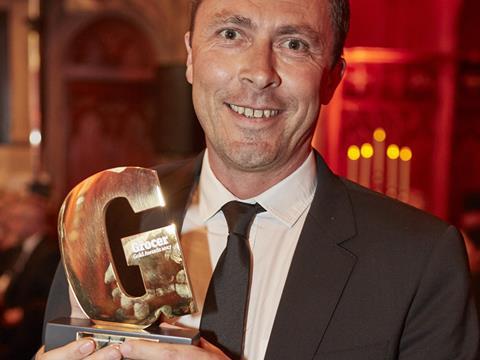 McNair accepted a Grocer Gold award in 2017 for Purdey’s ThriveOn push, which won consumer initiative of the year

McNair will start his new job on Monday (29 October) having spent three-and-a-half years at Britvic in a variety of senior marketing roles. Under his current title of GB marketing director, he has led the development and growth of a wide portfolio of brands, turning around Robinsons and J2O and relaunching Purdey’s and R Whites.

McNair began his career in food and drink in 1995 as an area sales manager for Whitbread Beer, where he spent a year before joining Unilever.

His final role before joining Britvic in May 2015 was VP of marketing foods, North America.

At KP Snacks, McNair will replace Jeff Swan, who was promoted by owner Intersnack Group in May to the position of managing director of Largo Foods.

KP had “a great portfolio of brands” said McNair, praising the Butterkist owner’s “fantastic culture” and its “desire to drive its growth agenda even more”.