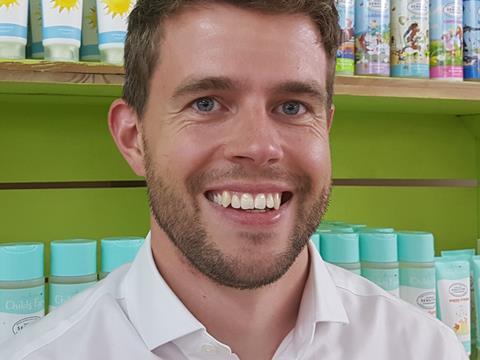 What was your first job? At a hotel restaurant washing up in the kitchens. I got fired four weeks in when they realised I was too young to be working there legally.

What’s been your worst job interview? A whole day of back-to-back interviews at a major tech firm was enough to put me off ever working in that particular industry.

What was the first music single you bought? Run-DMC feat Jason Nevins, ‘It’s Like That’.

How do you describe your job to your mates? I’m responsible for trying to get a range of Childs Farm miracle products on to the shelves of retailers across the world.

What is the most rewarding part of your job? Getting letters, emails, pictures, phone calls and even poetry from people around the world whose lives have been transformed by Childs Farm’s products.

What is the least rewarding part? When exciting ideas and plans get watered down, delayed or cancelled by the bureaucracy and rules of the bigger businesses we work with.

What is your motto in life? Always keep things simple, don’t take things too seriously.

If you were allowed one dream perk, what would it be? A device that stops time, just so I could catch my breath every so often.

Do you have any phobias? I’m not that keen on cockroaches, especially when they’re mid-flight.

If you could change one thing in grocery, what would it be? I would ban all internal emails, keep meetings down to 10 ­minutes, get everyone out to stores, spend less time analysing data and more time listening to what shoppers actually want.

What luxury would you have on a desert island? I love swimming, so I would bring some goggles and my wetsuit and make the most of some time to relax and do some exercise.

What animal most reflects your personality? Cats - mainly because they are independent, enjoy the simple things in life and are happiest when eating.

What has been the most embarrassing moment in your life? I once sent an angry text to my wife complaining about how late my buyer was to a meeting. As soon as I pressed send I realised I’d just sent it to the buyer. It was rather an awkward meeting.