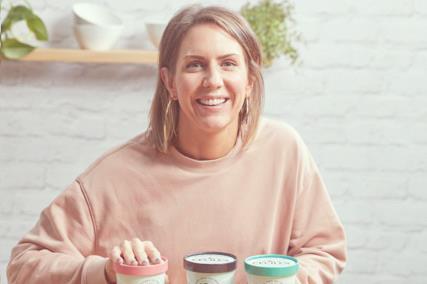 What was your first job? Cooking for guests on a yacht that sailed the Whitsundays in Australia when I was 18.

What was the first music single you bought? I want to say Aerosmith but it was probably the Spice Girls.

How do you describe your job to your mates? I make and sell ice cream.

What is the most rewarding part of your job? Creating new flavours and tasting them out on friends and family for feedback.

What is the least rewarding part? Distribution can be a headache.

If you could change one thing in grocery, what would it be? Well, of course all the supermarkets who don’t currently stock Cecily’s would be stocking Cecily’s, and this would go along with a universal UK-wide store layout change and freezers would be the first thing as you walk in…

What luxury would you have on a desert island? A freezer. Staying on-brand wherever I go.

What animal reflects your personality? I want to say a lion, not least because I’m a Leo, and lions are cool. But the truth is it’s probably more a squirrel or something equally unglamorous: a bit frantic, a bit annoying, kind of endearing in the right light.

What’s your favourite film and why? Carry On Cabby. It’s just brilliant.

What has been the most embarrassing moment in your life? I’m laughing just thinking about it. It was awful. It was when I was a store manager for M&S. I had to have a formal meeting with my deputy store manager about falling shopfloor standards – I was 26 and had just finished my graduate training, she was in her 50s and had been with M&S for years and years. I had to build a case and present evidence. The meeting day came, she was very frosty, very defensive. I was nervous as anything, so you can imagine how I felt when I was reading the document with her, and I read a line that included the words ‘you can’t’ only ‘can’t’ was misspelled in the very worst way.

What would your death row meal be? I have no intention of getting myself on death row. Ever. But my favourite meal starts and ends with ice cream.