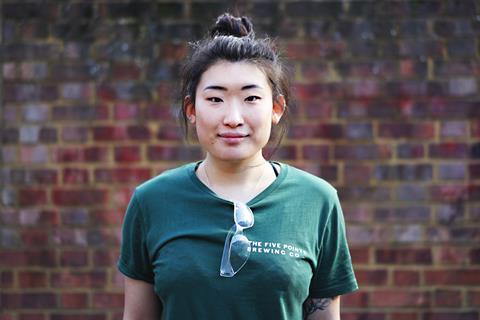 Why did you decide to go for a career in food? After graduating university, I knew I wasn’t going to use the subject of my degree, so as a stop-gap I decided to work in a brewery taproom until I could decide what I wanted to do. Luckily the answer was right there. Emerson’s Brewery in New Zealand was the gateway to my journey in brewing, where I started running the tours of the brewhouse and doing tasting sessions.

Explain your job to us in a sentence: I help in all aspects of making a brewery run successfully.

What does a typical day look like for you? No two days are the same as it depends what we are brewing, how many times, what beer is ready to package, and into what format. Some of my daily jobs include: weighing and preparing the malt for the brews, loading the malt into the grist case, getting in the mash tun and digging out the spent grain, cleaning tanks, bottling, canning, kegging or casking, adding hops to the tanks, and taking samples of the beer and making sure during and after fermentation the beer is happy and looked after.

Tell us about how you went about applying for your job. I initially saw the ad for the job after the applications had closed and thought I had missed my chance. I applied anyway and followed up a few weeks after the closing date. I heard back for a casual interview over coffee with HR straight away. They referred me to the head brewer who asked me in for a trial shift two days later. After a super fun six-hour trial shift where I got stuck into trying everything I could, I was offered the job on the spot, which I graciously accepted!

What’s the best part about working for a food company? The obvious answer would be the free beer… and it is. But also, the satisfaction in producing a tasty product from raw materials and seeing it out in trade (bars, supermarkets etc). It’s always awesome to be out in a random bar with friends and see our beer on tap.

And what’s the biggest misconception people have about working in food & drink? That you need to have a degree in food science or similar academic experience. I went straight from graduating with a completely unrelated degree to stumbling across a different industry I wanted to join. From there, a lot of hard work and taking all the opportunities that came my way led me to where I am now. Hopefully I will keep moving forward and become a fully-fledged brewer very shortly!

What advice would you give to other young people looking to get into the food & drink industry? For the brewing industry specifically – it can be a tough gig but it’s incredibly fun and rewarding too. My advice would be to look after yourself physically and mentally. There is a lot of physical labour involved and if you push yourself too hard you will inevitably burn out. Take time where you need it and look after your body!

What’s your ultimate career dream? To become head brewer at a small but established craft brewery. I am excited to pay my dues and spend time as a production brewer for a few years but in the end, I am an incredibly organised and creative person, so to be able to run a brewery in the best way and also be able to have a hand in producing new and innovative beers would be amazing.