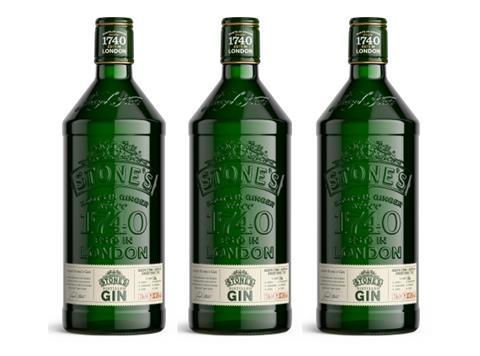 Accolade Wines has set its sights on cashing in on the gin boom by taking its ginger wine brand, Stone’s, into spirits.

It has unveiled Stone’s Gin (37.5% abv), which is infused with ginger as well as traditional botanicals such as juniper, lemon, capsicum, black pepper and lemongrass (rsp: £18/70cl).

The ginger wine traces its roots back to London’s Finsbury Distillers in the 1700s, where gin was also distilled during the century’s ’gin craze’, meaning it “felt natural that we go back and honour the distillers of Finsbury by blending our gin heritage and roots in ginger”, said Stone’s brand manager Abigail Whithair.

The launch will be backed by “PR led, unique consumer tasting experience”, as well as on-trade activations based around the ‘Stone’s G&G’, the gin served with ginger ale rather than the traditional tonic, garnished with fresh lime and ginger.

The news marks the latest in a series of forays out of Accolade’s wine heartlands into other booze categories. Last year it unveiled a Summer Berries Fruit Vodka for its Echo Falls brand, which it has also recently extended into Prosecco.

Branching out into different categories demonstrated “the strength of our brand portfolio”, said Accolade marketing director David White. “We are confident that this exciting new product will encourage both our current and new consumers to try Stone’s Gin.”

This latest step in Accolade’s diversification drive comes as its biggest wine brands have faced significant losses in the supermarket over past years. As seen in The Grocer’s 2018 Britain’s Biggest Alcohol Brands report earlier this year, its two front runners - Hardy’s and Echo Falls - had suffered year on year value declines of £20.9m (7.2%) and £16.2m (9%) respectively [Nielsen 52 w/e 21 April 2018].

Echo Falls has, since then, has suffered a slew of delistings in the mults. Its presence has been almost halved in Sainsbury’s, which slashed it from 12 to five SKUs, while Morrisons has reduced it from 16 to seven [Brand View 52 w/e 15 October 2018].