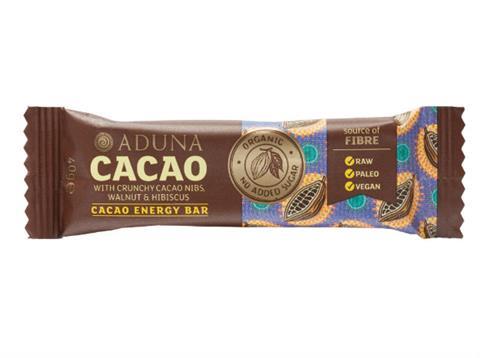 Africa-inspired health food brand Aduna has added a cacao variant to its superfood energy bar range, in an effort to become ’more mainstream’.

Each 40g bar is made from antioxidant-rich cacao – a raw form of chocolate derived from the cacao bean – walnuts and hibiscus, and provides 163 calories.The snack, which also contains 2.6g of fibre and 3.9g of protein, is free from refined sugar, wheat, dairy, gluten, additives and preservatives.

“We are hoping this will be a more mainstream bar as the hero ingredient is much better known than baobab and moringa,” said Aduna co-founder and managing director Andrew Hunt.

Social business Aduna was formed in 2012 to create demand for under-utilised natural products from small-scale producers in Africa. In November 2014, the supplier launched its Baobab Raw Energy Bar, building on the success of its baobab powder, which it claimed had been the bestselling supplement of 2013 in Planet Organic and Whole Foods Market.