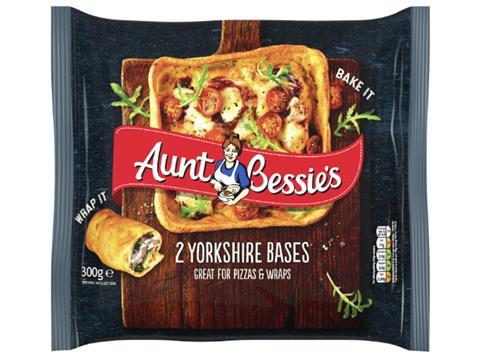 This week’s rollout of the large square bases (rsp: £1.50/300g) comes as “Yorkshire puddings are as popular as ever, with many consumers creating innovative recipes to enjoy the product’s recognisable taste and texture in modern ways” according to Aunt Bessie’s.

It is being joined in freezers by three more new products from the Nomad Foods-owned brand. Chantenay Carrots & Parsnips (rsp: £1.99/400g), seasoned with olive oil and mixed herbs, are aimed at consumers “seeking out more premium offerings to celebrate the festive season”.

The quartet of new products came “at an exciting time for the business” said Haas.

Last month, Aunt Bessie’s dropped the Margaret and Mabel characters from its TV adverts after nine years, replacing them with a £5m push called ‘Bring Out the Bessie in You’ to focus on roast dinners – four months after being acquired by Nomad for £210m.