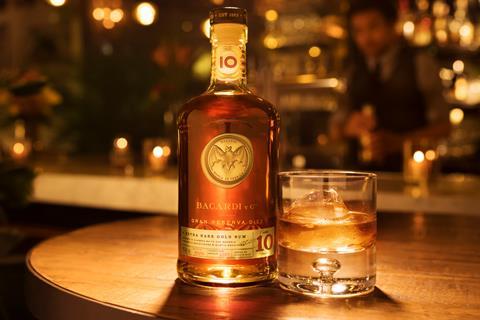 Bacardi has boosted its range of posher, sipping rums with a new golden rum.

Bacardi Gran Reserva Diez (40% abv) is matured in charred American white oak barrels and filtered through charcoal, which Bacardi said gave it a “smooth finish”, which made it best served neat or on the rocks (rsp: £52/70cl).

It is the latest in a series of barrel-aged rum from the brand, after Bacardi Añejo Cuatro, which rolled out last year.

Bacardi is increasingly focusing on golden and more premium rums, as sales of its core white rum, Carta Blanca, have fallen over past years: latest figures show it suffered a £2.2m (2.2%) sales drop over the year to 7 September 2019, bringing its value to £98m [Nielsen].

It was overtaken in sales by Captain Morgan last year, winning the Diageo brand the title of Britain’s biggest rum brand.

Bacardi had “observed a big shift in the rum category towards premiumisation so the decision to grow our premium offering was an obvious one”, said Bacardi Europe brand director Tine Van Nevel.

“People are increasingly opting to trade up to more sophisticated drinks and are not willing to sacrifice quality for price.”

Gran Reserva Diez has rolled into Amazon and specialist retailers.