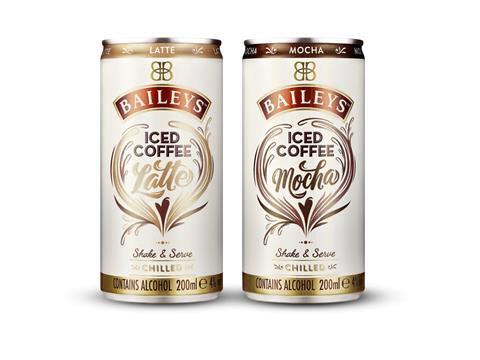 Baileys is set to push into the iced coffee category with two new RTD pre-mix variants backed by a six-figure push and tie-in with Made in Chelsea.

Latte and Mocha  will launch into major grocery multiples this month with an abv of 4% (rsp £1.90/200ml). They blend Arabica and Robusta coffee with real milk, real cocoa – for the mocha flavour – and Baileys Irish Cream.

The range should be merchandised in the iced coffee aisle “next to the non-alcoholic coffee options”, said the brand. It hopes to tap recent growth in the iced coffee category – where it said value sales were up 44% over the past two years.

The alcoholic iced coffee would make Baileys relevant throughout the year, “not just winter” and “bring something entirely new” to the category, the brand claimed.

“As we continue to see how successfully Baileys works alongside coffee, and in serves such as the popular flat white martini, we see the launch of the new Iced Coffee variants as a natural progression for the brand,” said Sam Salameh, Baileys marketing manager for Europe.

Baileys has also signed a three-series deal as lead sponsor of Made In Chelsea, the BAFTA award-winning ‘constructed reality’ programme scheduled to return to E4 on 20 March.

The partnership would drive awareness and engagement of the new product among the target audience, said Baileys. “It is one of the most talked-about TV shows in the UK, and is the best converting show for ABC1 women aged 18 to 34, in keeping with the Baileys consumer.”