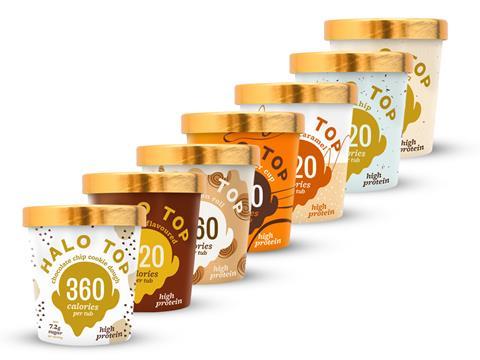 US grocery sensation Halo Top made its UK debut in January

Ben & Jerry’s has joined the low-calorie ice cream craze, taking on the likes of Halo Top and Unilever stablemate Breyer’s Delight with the launch of its Moo-phoria lineup.

Set to hit UK freezers in March, the new Ben & Jerry’s duo, Chocolate Cookie Dough and Caramel Cookie Fix, contain no more than 132 calories per 100ml, putting them in line with Halo Top’s 280-360kcal per pint.

Moo-phoria’s British debut was preceded this week by its launch in the US in three variants. Positioned as ‘light’ ice cream, it is free of artificial sweeteners and sugar alcohols and is lower in fat than standard B&J options. It is made with organic milk and cream, while its vanilla and sugar are both Fairtrade.

The UK’s low-cal ice cream trend kicked off in earnest in January, when US grocery sensation Halo Top made its highly anticipated entrance. The brand was launched in the States in 2012, reaching $50m in sales by 2016, according to Inc. magazine. It now produces 25 variants, seven of which are vegan-friendly, and is available in 19,000 US stores.

Arriving in Tesco and Ocado with seven flavours, Halo Top was joined in freezers by its Unilever challenger Breyer’s Delight in four ‘healthy’ variants. Both are sweetened with stevia, make a high protein claim, and advertise their calorie count prominently on front of pack.