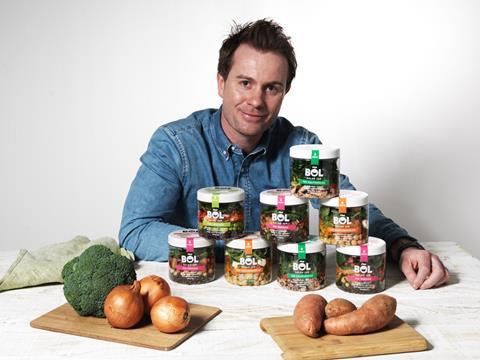 Bol, the ready meal brand launched by Paul Brown, the former head of food at Innocent, is expanding with an on-the-go salad range in jars, as part of a strategy to double sales to £14m in the next year.

The four-strong Bol Salad Jar range will launch with Ocado and Amazon Fresh on 18 May, marking the year-old brand’s first foray into ‘instant’ food.

Each salad comes with a separate dressing and fork in a California-inspired reuseable plastic jar that would enable consumers to “properly mix the dressing by pouring and shaking”, said founder Paul Brown.

The salads, which contain under 400 calories each, would appeal to a “slightly younger” female audience than Bol’s pot meals, he said.

Brown estimates the salads will clock up £7m for Bol in their first year, replicating the success of the brand’s meal pots, which have generated £7.2m since their launch last April, following the axing of Innocent Veg Pots [Nielsen 52 w/e 22 April 2016].

Plans were in the pipeline to launch a dinner range in September, with long-term proposals to extend into breakfast and become a £50m brand by 2020, said Brown.