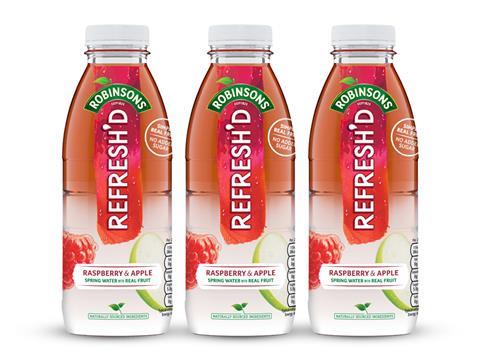 Britvic is hoping to tap Brits’ thirst for healthier soft drinks with the introduction of low-sugar Robinsons Refresh’d, a fruit-flavoured water range that claims to be 100% natural.

The launch was aimed at tapping demand for “healthy hydration”, said Kevin McNair, marketing director at Britvic GB. “We’re bringing the trusted Robinsons brand name to an on-the-go audience with this exciting launch that is set to shake up the category.”

The new lineup comes after the soft drinks category enjoyed growth in 2016 as supermarket shoppers sought low-calorie and no-calorie options, according to Britvic’s new Soft Drinks Review for grocery.

The sub-category was ripe for growth through “other ingredients”, he added. “There’s an opportunity for added function – especially lots of flavour without sugar. That’s the next trend.”

Elsewhere in the soft drinks market, fruit carbonates were up 2.3%, buoyed by demand for healthier options, and low and no-sugar variants saved cola brands from a greater decline than their 1.4% drop, said Paine. “Tasty refreshment” was key to soft drinks’ appeal – and that included full-sugar options, he added. “Low calorie will help the health of the nation, but choice still stands.”

However, Britvic’s numbers do not include impulse, while The Grocer’s own data suggests sugar is powering sales of cola, with the original variant of Britvic-distributed Pepsi seeing value up 2.1% to £119.1m [Nielsen 52 w/e 31 December 2016].