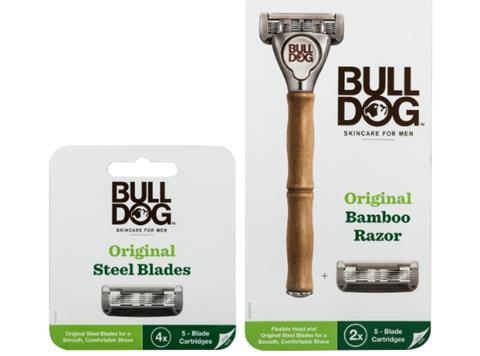 Bulldog Skincare for Men has made its first move into razors with the launch of the environmentally friendly Original Bamboo Razor.

The new grooming device (rsp: £12) features a water-resistant handle made from bamboo rather than plastic. It is packed in a recycled cardboard carton with two cartridges featuring five tempered steel blades, an aloe vera glide strip and a precision trimmer that “allows for an easy precision shave”. Each refill pack contains four cartridges (rsp: £8).

The NPD – expected to make its debut in Boots in August – is the latest move by Bulldog to boost its sustainability credentials. The bamboo handle comes after the brand switched the tubes for its moisturisers, scrubs and washes in November from oil-based plastic to plastic made from Brazilian sugarcane.

“We felt that the razor market lacked any focus on the environment,” said a spokeswoman for Bulldog. “We’ve really made this paramount in the making of our new innovation.”

The brand made its first dedicated move into shaving products in May 2016, rolling out featuring four products in formats including a barbershop-style metal tube and an air-powered canister.