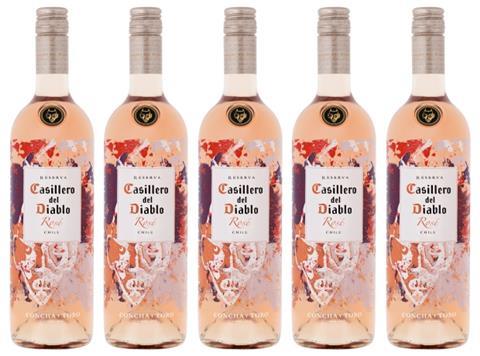 Concha y Toro has unveiled a new bottling of its Casillero del Diablo rosé for the summer.

Casillero del Diablo Rosé has been given a Summer Edition pack, while the liquid has been switched from solely shiraz grapes to a shiraz, cinsault and carménère blend. It has rolled into 495 Tesco and 201 Asda stores (rsp: £8.50/750ml).

There was “a strong move towards lighter styles of rosé, and the new Casillero bottling chimes with this trend”, said Ben Smith, head of corporate communications at Concha y Toro. “The bottle design is created to add premium standout on shelf, in line with our goal of making wine more engaging for the consumer.”

It comes after a slew of lighter rosé launches from big wine brands. Both Pernod Ricard and Treasury Wine Estates have brought out variants over recent months, the former supplier having launched the 13.4% abv Petit Rosé under its Jacob’s Creek brand in September. Treasury rolled out an 11% abv ‘Pale Rosé’ variant for Blossom Hill in March.

Concha y Toro has also announced a tie-up with the Food Network, which will see an ad campaign for its Cono Sur Bicicleta brand air on the channel for six months.

The ads will play up the brand’s compatibility with food, and tell the story of the Cono Sur workers, who ride bicycles round the vineyard - hence the brand’s name. Concha Y Toro said the push would reach around 13m viewers. It will be backed by further digital and in-store activation.