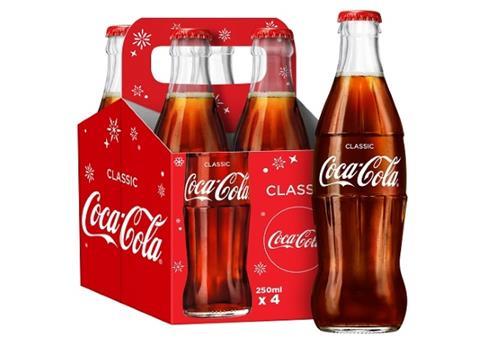 Coca-Cola European Partners is rolling out limited edition festive packs ahead of Christmas.

Additionally, it has launched a 4x250ml glass bottle multipack with Christmas snowflake graphics to “support the increase in at-home dining during the festive season”, it said.

New packs will be backed by the return of its ‘Holidays Are Coming’ ad, which will air from mid-November. A Coca-Cola Christmas truck will tour the UK, visiting 53 locations to “build excitement around the season”. Truck stops will include recycling bins fitted with sound chips that activate when bottles are recycled, tying in with the brand’s recent ‘Love Story’ recycling-focused advert.

The brand will also sponsor Capital FM’s Jingle Bell Ball at London’s O2 arena in December, which is expected to attract roughly 32,000 attendees.

Coca-Cola was “looking to encourage early sales by launching our Christmas activity in November”, it said. “Last year over 10 million more shopping baskets included a soft drink compared to 2015, and we expect this year to be even bigger.”