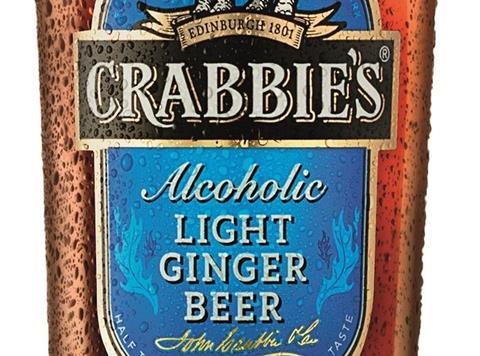 Halewood International is hoping to tap growing consumer interest in cocktails with the launch of Crabbie’s Light.

The 2.8% abv version of the alcoholic ginger beer contains 50% less ginger, which Halewood said made it suitable for mixing with a range of spirits. It is available in 330ml (rsp: £1.49) and 500ml (rsp: £2.29) bottles, and is rolling out throughout autumn. Like original Crabbie’s, the new product is steeped for six weeks, a process Halewood said made the drink a genuine ginger beer.

The launch follows the announcement last month of a seven-figure sponsorship of the returning TFI Friday, which began on 16 October and runs for 10 episodes.

Halewood will hope the new product makes up some of the decline in Crabbie’s Original, which is down 25.5% to £13.8m [Nielsen 52 w/e 10 October 2015]. Flavoured ginger beer variants Raspberry and Strawberry & Lime have also lost sales, although the Crabbie’s Fruits range, launched in March 2014, more than doubled to £2.6m.