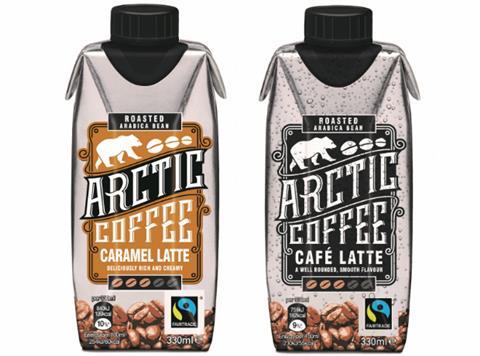 Crediton Dairy has revamped its Arctic iced coffee brand with new packaging and the launch of a new flavour.

The brand has secured a listing for its original café latte flavour and a new caramel latte variant (rsp: £1/330ml) in more than 450 Morrisons stores from today (30 October).

The drinks have also been given a packaging refresh to prominently feature their Fairtrade credentials. They will be backed by a social media campaign featuring the hashtag #gowiththeflow, which will support the brand’s expansion, and its aim to create an online community of iced coffee devotees, Crediton said.

The Devon-based supplier said more than five million cartons of iced coffee had been sold during the 18 months since it launched in May 2016 as a Co-op exclusive. So successful were sales that the Co-op subsequently launched an own label version of the drink, Crediton added.

“Our research tells us that one of the main barriers to shoppers buying iced coffee is that they see them as expensive and as a result they are viewed as an occasional treat instead of a regular purchase,” said Nick Bartlett, head of sales and marketing at Crediton.

He attributed the success of the original Arctic product to the brand’s modern and convenient packaging and accessible price point.

“Our ability to deliver taste at a great price is resulting in high repeat sales rates among shoppers. We believe our new caramel latte flavour will replicate the strong sales of café latte by offering an alternative flavour to consumers.”