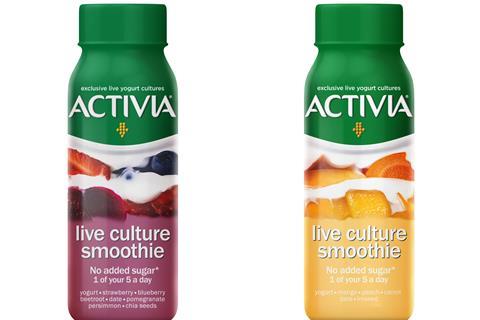 The smoothies marked a big step change for Activia, Danone said, as it entered into a new category and shelf position

Danone has expanded its Activia lineup with the launch of two new live culture yoghurt smoothies packed with fruit & veg.

The drinks, which will be merchandised in the food-to-go aisle, contain no-added sugar and billions of gut-friendly live cultures. In a first for the brand in the UK, it also offered shoppers the added benefit of including one of their 5 a day, Danone said.

The products had also launched in “several” other European markets in recent months, the food giant added. They will begin rolling out later this month to selected independent retailers, and will go on sale in Ocado, Whistlestop and Pumpkin cafés by September and in the Co-Op from October. A wider launch was also planned across the mults later this year (rsp: £2.09 per 250g bottle).

The launch marked a “big step change for Activia”, said brand manager Ben Kind, as it entered into a new category and shelf position. It will be supported by a nationwide media campaign with a strong digital focus, including influencer and shopper activation.

The smoothies would also open up “great potential to leverage the growth of fermented products”, he added.

“We know that younger consumers in particular want both nutrition and convenience – rather than having to choose between one or the other. Our live culture smoothies will launch in a convenient bottle format; ensuring that this delicious and nutritious product can be enjoyed on the go.”

The launch follows a third revamp of the Activia brand in as many years in March, which saw Danone roll out new packaging and recipe reformulations.

Activia’s new look ditches all mention of the dairy giant on the front of pack, in favour of a “more modern” look, with double stacked packaging and transparent pots. It follows well-documented struggles by the brand during the past few years on the back of stagnating sales.