Elizabeth Shaw and Pinkster team up for gin-infused chocolate box 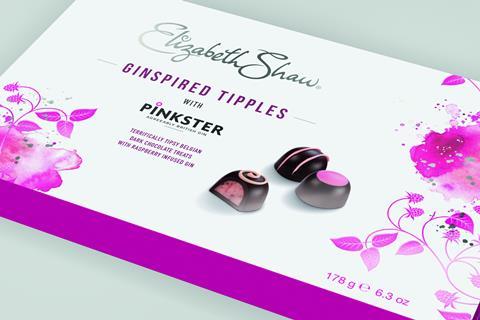 Ginspired Tipples will be available in Sainsbury’s from 30 September

Premium confectioner Elizabeth Shaw is set to roll out Ginspired Tipples, a box of cocktail-flavoured chocolates made in partnership with Pinkster Gin.

Available in Sainsbury’s from 30 September, the NPD is the first in-laid boxed chocolate to be brought to market by Bristol’s Elizabeth Shaw beyond its range of after dinner mints.

Ginspired Tipples would secure Elizabeth Shaw’s “foothold in the boxed chocolate market, which had a registered total retail sales value of £830m in the UK in 2018, with in-laid accounting for 25% of this” said the 130-year-old brand.

The new chocolates would tap the gin boom, which had seen sales of the tipple grow by 40% year on year, Elizabeth Shaw added. “Ginspired Tipples is designed to appeal to Elizabeth Shaw’s loyalists while attracting new audiences of female shoppers aged 45-plus, who currently account for more than 59% of boxed chocolate trade nationwide.”

The team-up with Cambridgeshire’s Pinkster was “a significant move for our brand as we strengthen our product offering beyond our ever-popular after dinner mint range through trend-led flavour innovation,” said Elizabeth Shaw MD Karen Crawford. “Consumers are ever more adventurous, so we are too.”

Pinkster MD Stephen Marsh said Elizabeth Shaw was “serious about craftmanship and quality of taste as we are at Pinkster. We’ve long thought our gin made from real raspberries shouldn’t just be enjoyed as a G&T.”