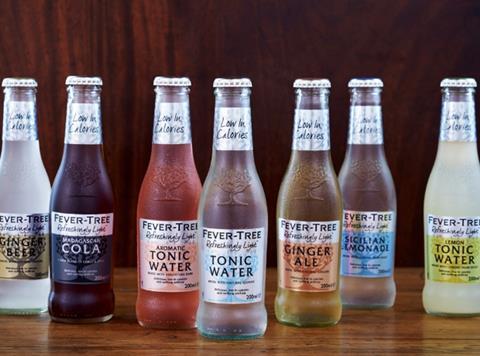 Fever-Tree is rolling out low-calorie versions of its entire range of mixers.

Eight new diet SKUs replicating each of its flavours will roll out from this month into the big four plus Waitrose, M&S and Booths in 500ml, 4x200ml and 8x150ml packs, priced at £1.70, £3 and £4 respectively. They will join its existing Refreshingly Light Tonic and its core range on shelves.

The new mixers, which Fever-Tree spent the past two years developing, are sweetened with fructose and contain 4g to 5g of sugar per 100ml - slightly more than the sugar content of Refreshingly Light Tonic, (which stands at 2.9g per 100ml), but below the threshold for the impending sugar levy.

Sweetening with this method created “a fuller mouthfeel with none of the cloying aftertastes associated with cheaper, artificial alternatives such as saccharine and aspartame that a number of our competitors use” said Fever-Tree UK sales director Andrew Ronald.

The launch will be backed by a marketing push over the year, but Fever-Tree did not reveal what form activity would eventually take.

The brand will reveal its full-year results on 13 March, and had predicted a 66% uplift in sales following “significant” market share gains in 2017, with revenues expected to hit roughly £169m after sales.