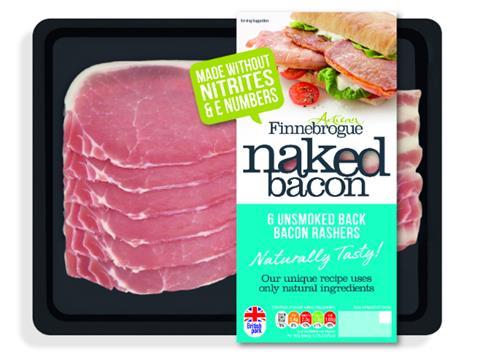 Artisan sausage and venison supplier Finnebrogue has announced the launch of a nitrite-free range of bacons and hams, which completely cuts out the ingredient associated with causing cancer.

Naked Bacon will launch on 10 January in streaky and back bacon variants, with listings in Waitrose, Sainsbury’s, Booker, and Tesco stores across the island of Ireland.

The brand will also go into Morrisons stores from April, with M&S carrying own-label variants, while the supplier will also launch Naked Ham on 15 January - with deli ham and outdoor-bred ham SKUs on offer - and listings secured in Waitrose, Sainsbury’s, Morrisons and Tesco in Northern Ireland.

Nitrites are added to cured pork to give the meat its characteristic pink colour, texture, and flavour while also acting as a preservative. However, the additive was singled out as a significant cause of cancer in a World Health Organization report in 2015, which warned consuming 50g of bacon per day - the equivalent to two rashers - could raise the risk of contracting bowel cancer by 18%.

Nitrite-free bacons have been marketed in the UK before, with some infused with naturally occurring nitrites from vegetables such as celery.

But the Naked range - which took an investment of £14m by Finnebrogue to develop - was the first to contain zero nitrites, the supplier claimed. It instead used curing technology developed by Spanish company Prosur, blending Mediterranean fruit and spice extracts to give pork its characteristic pink colouring, add flavour and match the shelf life of traditionally produced bacon and ham.

“For more than a decade I have insisted we do not touch bacon until we could make it better and safer,” said Finnebrogue chairman Denis Lynn. “I’ve been all over the world to figure out a way to make bacon without nitrites - and up to now we’d never made a single rasher of bacon.

Tom Cumiskey, Finnebrogue head of marketing and customer insight, added: “We’re hoping this will boost the category, creating a bacon that is a permissible pleasure.”

Pointing to consumer research by the supplier, he added: “Of those who are aware of the risks, almost half (47%) said they would eat more bacon if a nitrite-free option were available, so we’re opening up the category to more frequent usage occasions and encouraging those who have strayed to return.”

Lynn said: “Our Naked Bacon is not only safer than any other bacon on the market, it also tops the charts in blind taste tests. This is the biggest revolution in the British breakfast for a generation.”