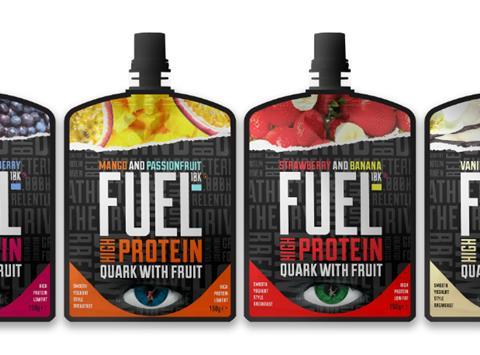 Fuel10K has unveiled an on-the-go addition to its high-protein breakfast portfolio, Quark With Fruit, a ‘yoghurt style’ SKU the Fresh Marketing brand claims is a category first.

Set to launch in Sainsbury’s during October, with an Asda listing to follow later in the year, the ambient NPD delivers about 10g of protein and 115g calories per 150g squeezable pouch of flavoured quark (rsp: £1.49).

Quark’s qualities make it a “perfect fit” with Fuel10K’s other ranges, said the brand’s head of sales, Scott Chassels. “It’s an excellent source of natural protein that helps you feel fuller for longer, and it’s low in fat.”

The result of 18 months’ development, Quark With Fruit is “ideal for younger shoppers who have been skipping breakfast and avoiding the cereal aisles”, Chassels added.

It will be supported by a ‘massive’ sampling exercise as part of Fuel10k’s role as the official breakfast of Tough Mudder, the endurance race series.