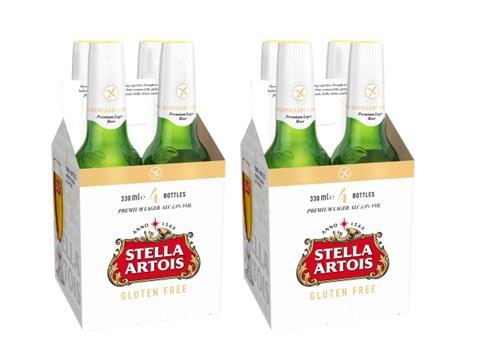 Sales of gluten-free beers have more than doubled this year, sailing past the £10m mark on the back of Britain’s free-from explosion.

It comes as Stella Artois this week became the latest big beer brand to enter the gluten-free market, unveiling a gluten-free version of the lager. Verified by Coeliac UK, the NPD will roll out into grocery late next month in 4x330ml packs, before a wider rollout in the autumn.

The beer has the same abv (4.8%) as standard Stella, with gluten removed “through the use of a specific protein without altering the unique taste” according to the brewer.

The NPD would be placed outside traditional BWS aisles, said AB InBev, and would drive “brand visibility and incremental sales”.

Many retailers, including Tesco, have already rolled out gluten-free beer fixtures over the past year, many of which are placed next to free-from foods rather than in the BWS aisles.

Peroni Nastro Azzurro is the category leader so far. Supermarket value sales of its gluten-free brew, which launched in February 2017, have hit £3.9m. Others such as San Miguel Gluten-Free and Old Speckled Hen Gluten-Free are yet to pass the £1m mark [Nielsen 52 w/e 21 April 2018].

Stella Artois retained its spot as the UK’s bestselling alcohol brand with value sales of £533.3m over the past 12 months, as revealed in the The Grocer’s Britain’s Biggest Alcohol Brands report this month.