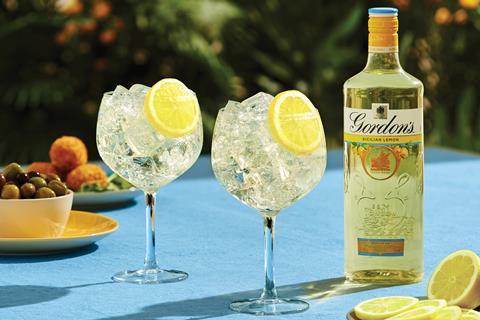 Gordon’s is launching a Sicilian Lemon gin ahead of the summer as it battles slipping sales.

Brand owner Diageo said it hoped the new variant would “follow in the footsteps” of Gordon’s Pink Gin, which had gone from “strength to strength” since its launch in 2017.

“As consumers become more adventurous with their drinks choices and want to explore new flavours, there is an ever-increasing appetite for different styles of gin,” said Jessica Lace, head of Gordon’s Europe.

“Following the amazing response to Gordon’s Premium Pink Gin, we aim to continue to engage the interest of current gin drinkers and recruit a new audience into the category with our new flavour innovation.”

However, the wider Gordon’s brand slipped into sales decline in the second half of 2019 amid growing competition in the gin market.

Commenting at the time, Dayalan Nayager, MD of Diageo Great Britain, Ireland and France, blamed the decline on the comparison with a prior period of “strong innovation”.