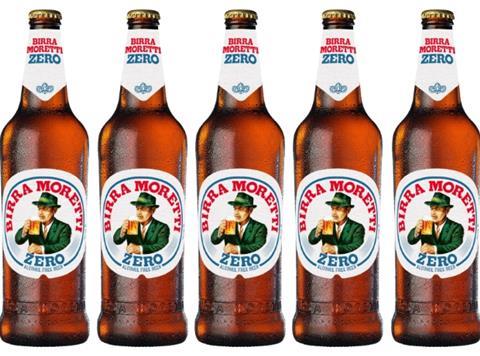 Heineken UK is to launch an alcohol-free version of its Italian lager brand Birra Moretti.

The 0.0% brew is due to hit shelves from March this year. It’s the latest in a series of alcohol-free launches from Heineken, which has gone full throttle for the booming booze-free market over past years with launches such as Heineken 0.0% and Old Mout Alcohol-Free.

Its rsp is yet to be confirmed.

The brewing giant was “very focused on driving innovation in this area”, said Toby Lancaster, category and shopper marketing director at Heineken UK.

“This year we will look to not only support retailers with NPD in the category, but also through the overall execution of the category and ‘zero zones’, to ensure that it has maximum impact and appeal to shoppers.”

Birra Moretti has proved a star player for Heineken in recent years, and saw particularly strong growth in 2018 thanks to the World Cup and the return of the beer to Tesco after it was delisted in the supermarket’s infamous fallout with the brewer in 2017.