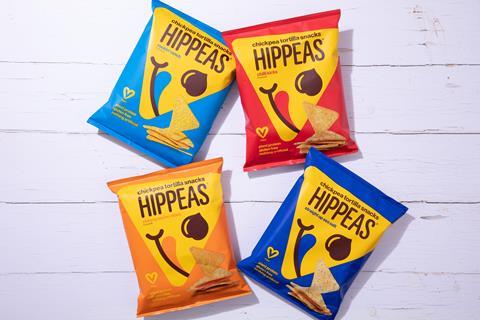 Hippeas Chickpea Tortilla Chips have rolled out in four flavours

Hippeas is moving outside puffed crisps for the first time with a quartet of chickpea tortilla chips.

They have rolled into Amazon, Boots, Booths, Holland & Barrett, Sainsbury’s and Waitrose.

They are vegan and gluten-free, and contain no palm oil or MSG. They contained “nothing artificial”, added Hippeas MD Sophie Higgins.

They were also higher in protein than rival brands, said Hippeas, with around 7g per 40g serving.

The launch marks the brand’s first foray outside of the puffed crisp category and its first new range since Paul Nardone joined as CEO last month.

Hippeas said Nardone would focus “on growing the brand’s portfolio” and “expanding production” in his new role.

Nardone said the brand had “tremendous growth in the better-for-you snack category.”

The brand’s founder and executive chairman, Livio Bestero, added that he hoped Nardone would help “Hippeas reach its full potential” and become a “household name”.