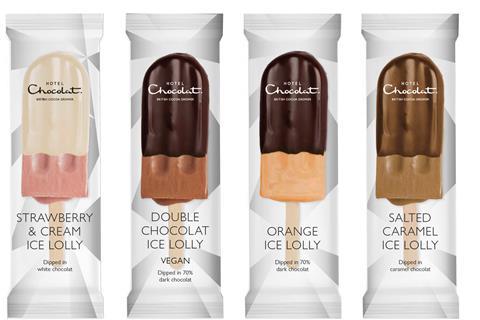 The products will be stocked in 10 stores

Hotel Chocolat is introducing vegan ice lollies as part of its continued efforts to increase its selection of vegan products.

The chocolatier will launch the range which consists of in orange and double chocolat flavours “in the summer.”

It will also add strawberry & cream and salted caramel ice lollies that are not suitable for vegans.

The fruit flavours are made with real fruit and all four are dipped in a different type of chocolate. Each costs £3.25 for 90g. The strawberry & cream line is dipped in high-cocoa white chocolate, while salted caramel is encased in caramel chocolate. The orange and double chocolat lines have 70% dark chocolate.

Hotel Chocolat’s vegan range already consists of free-from versions of its organic bunnies (rsp: £8/100g), as well as Puddles (rsp: £6/115g), which are made in an entirely free-from environment, and are free from gluten, dairy, nuts and wheat.

It added these SKUs in February, but they had sold “OK but not fantastically well” according to Hotel Chocolat CEO and co-founder Angus Thirlwell.

While the two lines made with 70% dark cocoa “have worked brilliantly in terms of taste” and had “great sales”, the two 45% cocoa SKUs had not fared so well, he admitted. “The range has shown us the opportunity of tapping into that market, and if we can make the 45% cocoa lines as smooth as milk chocolate despite using plant-based milks then the sky is the limit.”

The launch of the ice lollies follows a growing number of big-name ice cream brands adding dairy-free and vegan products to their ranges in recent years, including Halo Top, Alpro, Ben & Jerry’s and Häagen-Dazs.