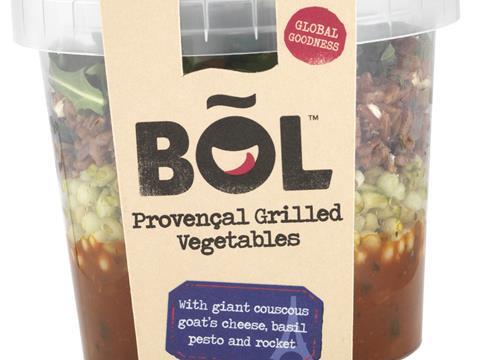 In the wake of Innocent axing its Veg and Noodle Pots, the business’s head of food is launching his own range of pot format ready meals.

Rolling out to around 700 Sainsbury’s from 29 April, Bol comprises 10 380g ready meals inspired by cuisine from across the globe. The brand goes into Tesco and Ocado from May. The line-up features four Vegetable Bols such as Provençal Grilled Vegetables, four Noodle Bols including Miso Soba (all rsp: £3.29), as well as two Super Bols with nutrient-dense ingredients such as quinoa and beetroot (rsp: £3.49).

The brand has been founded by Innocent food head Paul Brown, who is leaving Innocent as the business exits the food market to focus on drinks. The original Innocent founders have invested in the business and are main board advisors. Brown, who has worked at Innocent for 14 years, said he had dreamt of launching his own food business. “Bol has been launched to shake up ready meals with fresh flavours and textures, and bring innovation to a category largely dominated by own label,” he added. While similar in format and appearance to Veg and Noodle Pots, the meals have been developed by a new team of chefs and are manufactured by a new supplier.

Brown said innovation would be key to the brand, and has developed dishes containing white meat and fish for launch in the autumn.

The brand launch will be supported by sampling and price promotions, but Brown said he wanted to avoid over-reliance on deals.