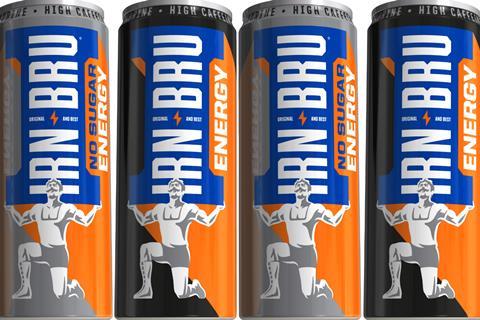 The regular variant contains 11g of sugar per 100ml

Irn-Bru has followed Coca-Cola’s example by adding an energy variant in a slimline can.

Rolling out in regular (rsp: £1.19) and sugar-free (rsp: £1.09) variants, the new drink combined “the iconic flavour of Irn-Bru’s top-secret essence with the taurine, caffeine, B vitamins and taste of an energy drink” said the AG Barr brand.

The Irn-Bru NPD will be available from 1 July only in Scotland, where “consumers spend 40% more on energy drinks than the rest of the market, and 70% of Scottish energy consumers already drink Irn-Bru” according to Barr commercial director Jonathan Kemp.

The soft drinks maker was confident that demand for both of the new Irn-Bru Energy products will be high, as “four out of five energy drinks bought currently are regular and the low-calorie energy market is growing 16 times faster than the full-sugar sector”, he added.

The launch will be supported from late July by a push including targeted digital and social media activity and OOH.

It follows the grocery debut last month of Coca-Cola Energy in a slimline 250ml can. The move came as part of the soft drink leviathan’s strategy to “offer people a range of drinks to meet different lifestyles and occasions”, said general manager for GB and Ireland Jon Woods.