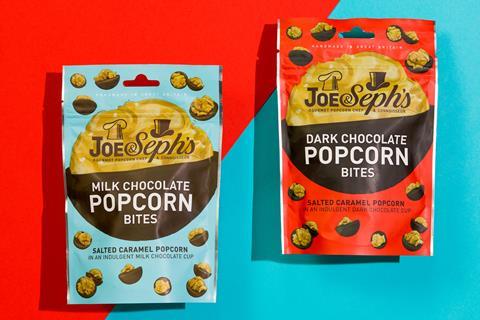 Posh popcorn maker Joe & Seph’s is set to make its confectionery debut with Popcorn Bites, a chocolate-based treat in a sharing format.

The two variants, Milk Chocolate and Dark Chocolate (rsp: £2.50/63g), will roll out from 17 March exclusively into Sainsbury’s – around six months after the grocer entered into discussions with Joe & Seph’s about the possibility of a launch.

The concept for Popcorn Bites, however, had been around “for years”,  Joe & Seph’s co-founder Adam Sopher told The Grocer. “We’ve always wanted to do a chocolate product.”

The London brand’s ambition had grown over time as it had increasingly seen its portfolio of indulgent popcorn challenged in the bagged snacks aisle by better-for-you rivals.

The final result comprises a semi-sphere of chocolate – handmade in-house – topped with a piece of salted caramel-coated, air-popped popcorn. The milk chocolate is 37% cocoa and the dark is 55%.

While Joe & Seph’s has chocolate-coated popcorn variants in its portfolio and has teamed up with Divine Chocolate for a Divine-branded Easter egg, Popcorn Bites was “a totally different product” and the brand’s first to be ranged alongside confectionery, Sopher said. “No one’s ever done anything quite like it.”

The new snack would “introduce our brand to a new audience, who we know are interested in natural indulgence” he added. “It’s such a big launch for us.”